The refugee crisis: Can corporations succeed where governments failed?

The response across European governments to the Syrian refugees has been ineffective and slow. Can corporations succeed?

Ioannis Ioannou
Opinion
Save to my profile

The response across European governments to the nine million Syrian refugees that have fled their country since 2011 has been uncoordinated, ineffective and slow. 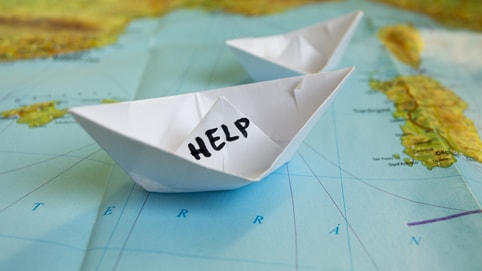 It has, however, highlighted the voids and conflicting ideological approaches within Europe, and the critical policy failures of transnational institutions like the European Union.

In recent years, many have argued that given the failure of governments and global institutions to take action on important socio-environmental challenges, corporations should or could step in voluntarily and contribute towards their resolution. Climate change is the first of such challenges to come to mind. Whereas the vast majority of scientists agree that well-coordinated, quick and effective action is urgently needed to avoid global warming above two degrees Celsius, governments have, to date, failed to arrive at binding agreements to reduce carbon emissions enough to sustain global temperatures within a safe range.

On the other hand, through various company-led initiatives, as well as industry-level collaborations with NGOs and other key stakeholders, a number of leading corporations have not only perceived the existential threat that climate change poses but also, have begun to take bold action by setting ambitious targets for reducing carbon emissions and to innovate across their products, services and even business models towards a more sustainable future.

However, with few exceptions, the business community has been absent from the debate about how to best deal with the refugee crisis, not only in the short term but importantly, in the long term. Thus, in an era in which the world’s largest corporations are becoming ever more powerful, it is high time that societies established a conversation around two key questions: (a) should the business community share responsibility for dealing with the refugee crisis in the short-term as well as the long-term and (b) if yes, what are the boundaries of its potential responsibility.

Already, some companies have assumed a share of the responsibility and have contributed to the crisis in a predominantly philanthropic or charitable way. For example, BT and Goldman Sachs have made generous financial donations to humanitarian organisations that provide immediate relief to refugees arriving in Europe. Others, like Unilever, have provided in-kind donations to refugees in the form of products or services while some law firms have offered pro bono legal support to asylum seekers.

Two things are worth noting though: corporate involvement has mostly focused on short-term solutions in the form of relief and, to an important extent, corporate responsibility seems to end where the appetite for corporate philanthropy also ends. There are, of course, those who suggest that providing employment is an effective way in which businesses can positively contribute to the easing of the crisis in the long term. Employed refugees, whether skilled or unskilled, could generate a healthy income to sustain their families, contribute to economic growth, establish a home and perhaps, in due course, and through generations, they might be able to integrate with their host communities through shared language and culture.

Yet, successful long-term solutions are always more difficult to find and implement than short-term ones. A well-intentioned company in Hungary, seeking to share responsibility for the crisis by employing refugees, will be completely unable to do so for as long as the Hungarian government keeps the borders of the country, and indeed of the European Union, militantly closed. That border is exactly where politics meets business but it also represents a governmental policy that imposes a boundary on the extent of corporate responsibility.

Companies may also face a societal backlash in countries that already face high unemployment rates: in such contexts, well-intentioned corporate policies could have unintended negative consequences in the form of resentment towards refugees by locals, who may allege that refugees are stealing away their jobs. In other words, corporate responsibility may be, in a very pragmatic way, bounded by the politics of the national context. Such boundaries can generate fundamental trade-offs for companies but they could also become a catalyst for proactive corporate action that would aim to change the very rules of the game.

To the extent that some corporations claim to redefine their role in society through their operations and societal contributions, global challenges such as the refugee crisis provide a unique opportunity for them to prove their claim. For example, could business catalyse changes in national labour laws and regulations, given that the inflow of refugees and migrants may well be beneficial for the economy as a whole? And if yes, how can corporates go about overcoming populist or myopic political tactics such as the ones we observe in countries like Hungary? Could companies play a role in shaping cultural attitudes towards the broader issue of mass migration and if yes, what is the best way of doing so? Importantly, could corporates leverage some of their core capabilities in order to scale up local or regional initiatives and thus have a potentially transformative impact on the way societies respond to mass migration now as well as in the future?

The need for answers

Then there is the even more fundamental and controversial issue of the causes behind the refugee crisis, involving foreign policy, armed conflict, injustice, despair, and global geopolitics. That raises the question of whether and to what extent, economic prosperity is an effective answer to the crisis. And if it is, could companies, in collaboration with other societal institutions and organisations, take on the challenge of bringing economic prosperity to regions of the world that so desperately need it?

The answer is that they potentially could. But these are fundamental questions that we, as a society, have not yet sufficiently explored. It is high time we did. If we don’t, the acceptable boundaries of corporate responsibility will remain blurry. And for as long as they remain blurry it is very likely that most corporations will be conservative in their approach: philanthropy, charity and short-term relief are non-controversial ways of acting. But they also fail to leverage core competencies of the modern business organisation (e.g. innovation potential and problem-solving capability) and as such, they can never have the impact that a more profound engagement could have (to the extent, of course, that it is socially desirable). Unlike the case of climate change, by failing to impact core institutions, such as governments and politics, corporate involvement in the migration crisis will likely remain ad hoc, reactive and in the long-term, rather ineffective.

In sum, the broader question regarding the boundaries of corporate responsibility as it relates to mass migration is not only critical but it is also timely, particularly if one is to believe those who claim that the current refugee crisis is only a small preview of the waves of migration – reaching 150 million people by 2050 according to the Environmental Justice Foundation – that we will face due to climate change in the years to come. It is then, in short, urgent that we address these questions now.

Dear Sir/Madam, I am applying to the MBA at LBS. In order to have my IELTS results to you I need a valid email and post address. Could you kindly send me the official one for IELTS?