Brainchild of Indian winemaker Rajeev Samant, Sula Vineyards is taking on the world.

Kamalini Ramdas
Save to my profile

Brainchild of Indian winemaker Rajeev Samant, Sula Vineyards is taking on the world. 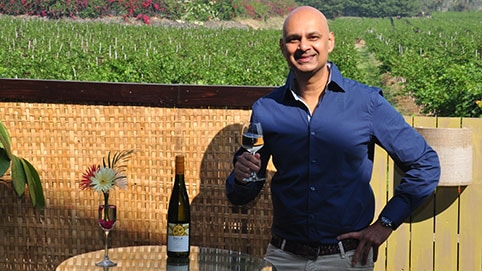 Rajeev Samant studied Economics and Engineering at Stanford University. After graduation, he worked with Oracle in Silicon Valley. On paper, he was living the high-tech career dream, but soon Samant became disenchanted with the IT industry.

He backpacked around the world and then returned home to his parents’ 20-acre plot in Nashik, Maharashtra, about 100 miles from Mumbai. He began to think about entrepreneurial ideas.
At first he tried growing organic mangoes, and then other fruits, but it quickly became apparent that real value in agriculture came from the processing of the crop, and the selling of that output as a branded product.


Furthermore, at the time there was little appreciation for organic produce in India, so market prices didn’t differentiate between produce grown organically, and the same produce grown conventionally.
Then inspiration struck. To Samant, Nashik’s landscape was reminiscent of the Napa Valley, the world-famous wine region in Southern California. With its warm days and chilly nights, Nashik was already the home of the table grape industry in India. Could he successfully grow wine grapes on the same land?

There were vineyards in India as long ago as the 16th century, but a combination of disease, prohibition, climate and public tastes had worked against the industry growing. To make his dream a reality, Samant had to find someone with the right experience to either support or reject his idea. An ebullient Californian fitted the bill. Kerry Damskey specialises in turning unconventional areas of land into successful vineyards. “I wanted to find vineyard locations that yielded distinctive fruit, because that’s what creates distinctive wines,” he says. “And when I walked the vineyard’s location, I knew that this was a singular place. My initial impression of Nashik reminded me of Arizona – wild and rustic.”


The taste of India

With Damskey’s technical support, grape vines were first planted in early 1997. Sauvignon Blanc cuttings were flown in from France. Chenin Blanc grape varietal cuttings, flown in from California, were planted next, with the vineyards producing their first grapes in 2000.

“It is a very capital-intensive business and many supplies have to be imported,” says Samant. “We imported corks from Portugal, foil from Spain, yeast from Australia and barrels from France. The result was an indigenous product made with international techniques and know-how, although we are constantly trying to indigenise raw materials wherever possible, a prime example being screw caps.”

The results were applauded as high quality and distinctively Indian. “When we produced those first Sula wines, they didn’t taste like California wines nor did they quite taste like European wines – they had a distinct taste of terroir from India. I thought great things were to come", says Damskey.

The Indian terroir holds certain terrors. “Most wine grapes are grown in temperate regions of the world – we are growing in a hot and humid climate which is congenial to pests and diseases,” notes Dr Neeraj Agarwal, the head of viticulture at Sula. “Also, unlike temperate regions where vines go dormant for six months during winter, our vines grow all year round. Wine growing is new to this region and, being in a subtropical climate, the challenge is to develop our understanding of the conditions.”

In the early years, Sula surfed a wave of growth as Indian consumers began to increase their consumption as a new young professional middle class emerged and Indians returned from their travels with a taste for wine. The Indian wine market grew at rates of between 25-30 per cent per annum, buoyed by the fast-growing luxury sector. The Maharashtra area in particular expanded rapidly with new wineries. By 2007, wine consumption was 12.6 million litres, up from 5.1 million litres in 2002.

But the Mumbai terror attacks in 2008 decreased tourist numbers and this led to a collapse in demand. The onset of the global economic crisis from late 2008 exacerbated the problem. India’s economic growth slowed to a full two percentage points below its pre-crisis levels. Wine consumption plummeted. Wineries, particularly those that had been expanding rapidly were left with large inventories; prices fell dramatically and profit margins were squeezed. Market leader Chateau Indage collapsed in 2009, after overstretching domestically and internationally, having also bought stakes in British and Australian wineries.


The fall in demand for grapes pushed down profitability in the agricultural sector. Many producers returned to table grape production, ripping out their wine grape vines at the same time. It was estimated that this led to India’s total area of wine grape vines falling to 2,000 hectares, down from a peak of 3,600.

Sula’s response to the crisis was key. Based on Kerry Damskey’s observations of US market strategies, Sula decided to produce a line of more ‘affordable’ wines under different brand names. Samara, Madeira and Port Wine 1000 were launched and priced between 100 and 250 rupees a bottle. While, at the time, there were a few other Indian wineries making port wine, it was largely sold and produced in Goa, and the quality was poor. Instead, Sula took the approach of using better grapes, with lower yields and more advanced winemaking techniques; the result was a dramatic increase in the quality over competitors’ products.

Extraordinarily, Sula managed to get these new wines to market within weeks – existing packaging was used, new labels quickly designed and printed, and wine already finished and in tanks, destined to higher-value wines was blended down and bottled. These plans were initially meant to be a temporary business solution to a perceived short-term market challenge, yet it turned out to be a critical business segment for Sula.
“While it was good to be a premium winery, the Indian wine market had not completely developed to survive only on that model,” says Samant. “However, our business model evolved to what many global wineries do now; that is to have both premium and value brands. It is necessary to be active in all ends of the market.

We also decided to expand capacity, not through newly constructed wineries, but by purchasing existing facilities that were doing poorly in that period’s ‘trading down’ environment.
“We have diversified significantly, leading to greater stability of revenues and greater confidence in our corporate forecasts. Our introduction of the economy and value wines was a great example of turning a potential crisis into a positive outcome that boosted long-term growth potential.”

In 2008-09, Sula took over three smaller wineries and expanded sales of ‘soft-serve’ wines in smaller bottles. These allowed customers to sample different wines, rather than having to purchase a full-sized 750ml bottle. This was an incredibly successful move for Sula, with sales growing from a base of 50,000 units in 2000 to an estimated two million units in 2007 and 2.4 million in 2008. Also contributing to off-premises retail sales growth was Sula’s decision to switch some brands from corks to screw-top bottles, as over 90 per cent of Indian households at the time were thought not to own a corkscrew.

Sula also found success in export markets, particularly in the UK, where demand grew to outstrip supply. In 2005, Sula sent its first shipment of 670 cases there to test the market response; by 2014 it had sent a total of 30 unique shipments, each bigger than the previous.

Along the way, Sula became India’s largest producer. By 2014, Sula Vineyards’ wines were available across the Indian subcontinent – where they had a 70 per cent market share – and in the export markets of 25 countries in Asia and Europe, and also in the US and Canada.

The result of Sula’s growth and increasingly diversified activity is that it is now a business with nearly 1,000 employees and four strands.
First is its domestic portfolio, which accounts for around 80 per cent of its revenue and produces wines across four price categories: economy and value, which are sold domestically, and premium and elite, which are sold both domestically and in export markets.

Second, Sula now has a hospitality business from its main vineyard and winery site, near Nashik. It attracts around 200,000 visitors every year, making it both the single largest outlet for wine consumption in India, and the largest outlet for Indians tasting wine for the very first time. Also important to Sula’s hospitality strategy is the Beyond by Sula – a 32-room boutique hotel – India’s first vineyard resort.
The third arm of the business is Sula Selections, which imports and sells foreign wine – 25,000 cases in 2014. The portfolio includes Remy Cointreau of France, William Grant of Scotland, Hardys of Australia, Rufno of Italy and Asahi of Japan. This area accounts for approximately ten per cent of revenue.

Finally, there is Sulafest. Started (technically) in 2008, Sulafest is one of India’s largest music festivals. The two-day event attracted over 11,000 visitors in 2015 and is one of Sula’s main branding vehicles.
“When I discovered Nashik in the 1990s it embodied the characteristics of Napa 30 years ago,” says Samant. “Technology, global best practice and R&D has enabled us to catch up at a much faster rate – traditionally wine players would have taken 50 years to reach the achievements we have made in the last ten.”