Imagine a world where employees never meet their boss. There is no interview. There is no face-to-face meeting.

Dan Cable
Consulting Commerce
Save to my profile

Virtual contracting is a large and growing trend. Burgeoning online digital marketplaces allow firms to employ people anywhere in the world. But there are challenges. Employer and employee never meet, and the relationship is temporary.

In this research project, Professor Dan Cable explores how companies can get the best out of contractors who could be thousands of miles away. 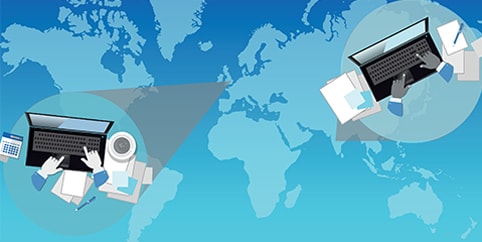 Imagine a world where employees never meet their boss.  There is no interview. There is no face-to-face meeting.  There is no chat over the phone to discover if a potential recruit is the right person for the job.

And even when these imagined people have started work, there is not one iota of communication between employer and employee – no words of encouragement or gentle reproach to encourage better performance.

This world already exists. So-called “virtual contracting” is widespread and growing. Online marketplaces match buyers of services that can be delivered electronically with freelance individuals or teams who are prepared to do a specific job. The two parties neither meet nor speak. There is a far cry from the conventional long-term employer-employee relationship.  It is more akin to buying a book through Amazon.

But how can this arm’s-length contracting be made as effective as possible?

How to maximise satisfaction for the contractor and productivity for the employer?

This is the question being addressed by a piece of research planned by Dan Cable, Francesca Gino and Brad Staats.

They are focusing on how the initial bargain between employer and virtual contractor is struck.

Look at what happens in a conventional workplace. When taking on a recruit, the employer has the chance to introduce the new employee to the culture of the organisation – spelling out how people work together and what is expected of them.

Recruits should also be given full opportunity to express themselves: they have a fundamental emotional need to articulate and project who they are and what they are good at.

However, there is a second, and important element when the two parties are starting to work together. Existing research has already shown that establishing a successful relationship involves more than simply telling an employee what to do and how to do it. Recruits should also be given full opportunity to express themselves: they have a fundamental emotional need to articulate and project who they are and what they are good at. People want other people to see them the same way that they see themselves: when this happens, they will perform creative tasks to a higher standard. Give recruits the opportunity to express what they see as their “best self” – using their new role as a vehicle to show off their strengths - and they will do a better job.

How to apply these ideas when taking on a virtual contractor?

Given that the contractor is never going to show up at the employer’s workplace, there is little opportunity to instil in him or her the culture of the organisation.

But the second idea - the notion of giving space for recruits to express their “best self” - need not be abandoned. It could apply even when the employee is a virtual contractor and the connection with the employer is through no more than a computer screen: instead of a mere transaction between the two parties, the right approach can engender something more akin to a true relationship. In the words of Dan Cable and his colleagues:

"If newcomers are encouraged to express their best selves, they “should be more satisfied with the relationship, view it as less transactional, and be more likely to perform well .”

It is this idea that is being tested by the new research. Three studies will be carried out.

In the first, a virtual contracting marketplace such as oDesk or MTurk, will be used to recruit people to input data – a repetitive and mundane task.  Each contractor will be asked to look at the photograph of a word and type that word into a space.

The contractors will be divided into three groups.  Before starting the job, one group will be asked to say “who you are when you re at your best”. What words would they use to describe themselves when they are at their best; why choose those words; what are the things that underpin a good experience and performance at work; and what was a time – either at work or at home – when the contractor was at his or her best? The applicants will also be asked how they might show their strengths when carrying out this new task.


Put simply, the applicants will be  asked to dwell upon what they are good at.

The questions asked of the second group are the mirror image of those put to the first.  They will be asked to reflect on their “worst self”. For example, “what leads to your worst experiences and worst performance at work?”

The third group, meanwhile, will be presented with a set of neutral questions, inviting neither a positive nor a negative response.  Take one representative question: “What three words describe you as an individual in normal circumstances?”

Once the three groups have completed their inputting tasks, the researchers should then be able to see whether the way the recruits were dealt with at the start of the job led to any difference in the volume and quality of work they produced.

A second study, using a new cohort of virtual contractors, will try to test a further idea.  The first study may well show that messages that the employee receives when they are recruited have an effect on how effectively they work. But does the impact vary according to how well the job is being paid? Some of the recruits will be offered a pay rate about 8% below the going rate; a second group will be paid at the going rate; a third will be paid 8% above. This second study will test the hypothesis that the type of “onboarding” of recruits – asking about their “best self”, “worst self” or neither – is particularly important when financial rewards are low.

The third strand of the research will try to test the idea that the reputation of the hiring organisation is significant in getting high-quality work from online recruits.

In short, how much difference does it make for employees to feel good about themselves – even when they are thousands of miles removed from their employer?