Who wants to be a COO? Stuart Crainer and Des Dearlove weigh up the options behind this little-understood corporate position.

Who wants to be a COO? You do? Then if you’re not a CEO in-waiting be prepared for a job minding the shop without too many prospects. Stuart Crainer and Des Dearlove weigh up the options behind this little-understood corporate position. 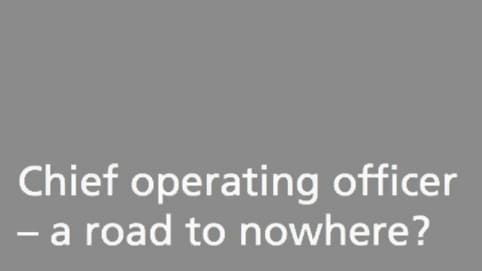 In recent months, COOs have seemed more like heirs-apparent than benchwarmers. Richard Parsons at AOL Time Warner, Hector de Ruiz at Advanced Micro Devices, Samuel Palmisano at IBM, David Brown at Owens Corning, and Keith Rattie at Questar have each made the leap from chief operating officer to chief executive officer.

The advancement of COOs is potent proof that they are now an important feature on the corporate landscape. Yet as the spotlight on the CEO’s job grows ever brighter, the number-two slot remains in the shadows. Just how important is the COO role in a modern corporation? Is it largely decorative or vital to corporate performance?

Step into the shadows, though, and you quickly discover that not all COOs are created equal. For some companies, the role is indeed a stepping stone to the top job. Others interpret it as a purely operational position. What research has been done on COOs also suggests that the jury is still out on the contribution they make to corporate performance.

The job title can be traced back to the 19th century though it really took off in the corporate world in the 1970s. In the mid-1980s, CEOs began to acquire shadows as surely as cacti in the desert. A Princeton University study of 433 large US corporations found that in 1964 none of the companies had a COO. By 1994 more than twothirds did. Today the COO is an institution in major corporations.