Bureaucracy: Where to liberate $3 trillion

Productivity growth is throttled by organisational red tape. Gary Hamel and Michele Zanini know how to untangle it

The advent of bureaucracy was a good thing. It stratified power structures and allowed the specialisation of roles. The standardisation of tasks meant organisations could achieve unprecedented levels of efficiency.

In the century-and-a-half since it came into being, bureaucracy has become the commonplace structure of large organisations. It is the glue that holds management together.

But much has changed since the 19th Century. Today’s employees are skilled, not illiterate; communication is instantaneous instead of being glacial; change takes place at an astonishing speed.

Yet still we are held hostage to the bureaucratic legacy. Most organisations are ill-adapted to the knowledge economy, let alone the creative economy. They are elitist, resistant to change and disempowering.

And no less important, the growth of bureaucracy has strangled productivity growth. Look at figures for the US. While productivity gains averaged 2.36% per year in the eight decades preceding 1972, it has averaged just 1.59% in the years since, according to data from Northwest University economist Robert J Gordon. Since 2008, productivity gains have averaged a mere 1.24% per year. At that rate, it would take 56 years for incomes to double.

To reverse the slump there is a solution: wring bureaucracy out of the economy. Based on our calculations, this would add US$3 trillion to economic growth in the US alone.


Despite all the hype about the “gig economy”, more Americans are working in large, bureaucratic organisations than ever before. In 1993, 47% of private sector employees worked in organisations with more than 500 staff. Over 20 years, that number grew to 51.6%. Large organisations - those with more than 5,000 employees - increased their employment share from 29.4% to 33.4%. Meanwhile, the number of self-employed Americans dropped to an all-time low.

And as employment has shifted towards large organisations, the number of people tied up in corporate bureaucracies has mushroomed. Take a look at Figure 1. Since 1983, the number of managers, supervisors and support staff in the US economy has nearly doubled. Meanwhile, employment in other occupations has risen by less than 40%. 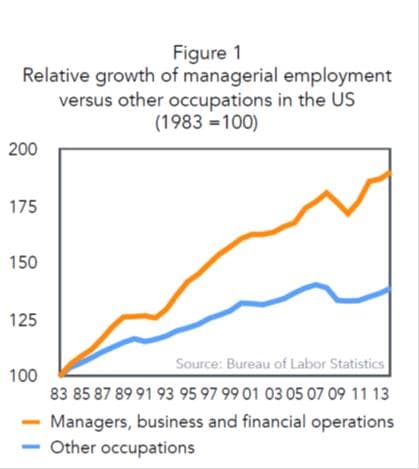 When the financial crisis hit in 2008, companies faced an acute need to reduce costs. They cut managerial jobs. But just like spiders growing new legs, notice how rapidly bureaucracy regenerated its limbs after the 2008 recession.

By 2014 there were an estimated 18.5 million managers and supervisors in the US workforce out of a total 135.1 million employees, according to data from the Bureau of Labor Statistics. (This latter figure excludes farm and household workers and the self-employed.) In addition, an estimated 5.3 million people worked in administrative support positions.

That means there is a bureaucratic class of 23.8 million people with one manager/administrator for every 4.7 workers. Remove support staff and whittle it down to count only the line managers and supervisors and the ratio still stands at 1:7.

And therein lies the potential for liberating US$3 trillion of extra economic output - by excising unproductive bureaucratic work and redeploying those energies into value-creating roles. (The figure could be as high as US$9 billion globally.) A reduction in bureaucratic drag would give the US economy a huge productivity boost.


But is bureaucracy so bad?


German sociologist Max Weber celebrated bureaucracy 100 years ago as being “superior to any other [organisational] form in precision, in stability, in the stringency of its discipline and in its reliability.” He was right. Bureaucracy was a major advance in solving the problem of efficiency at scale.

But times have changed. Today’s employees are skilled, communication is instantaneous and information is a swipe away on a phone. Most organisations to their detriment are poorly adapted for the creative economy.
Bureaucracy undermines resilience, innovation and initiative. Organisational growth adds hierarchical layers. As the ratio of managers to frontline staff goes up, employees with direct customer-facing roles go down over time. It leaves those at the top more isolated and organisations less responsive to the outside world. Gradually, a growing percentage of executive time gets consumed by trying to save the organisation from its own complexity.

Worse, additional layers feed a sense of disempowerment: employees feel unable to reshape strategies and policies owned by the firm’s gilt-edged leaders. This leads to a profound sense of helplessness and, ultimately, resignation.


Learning how to be lean


It is possible to run large, complex businesses with lean management practices. There are leading-edge firms the vanguards - that can teach the rest of the world how to break the insidious bureaucratic cycle.

Nucor, the most diversified steel company in the United States, is one example. It comprises 90 autonomous centres. Individual plants make product and pricing decisions and are responsible for their own product development. Self-managing teams within each facility oversee operations and are responsible for innovation and training. Its management model empowers the many rather than disempowering the few. It favours efficiency over conformity.

Nucor’s return on equity and return on assets consistently exceeds that of its peers. Management is a tool, not a job category.

On top of that, there is the chance to save the time currently spent by non-managerial employees in complying with organisations’ rules and regulations. A 2014 survey by Deloitte Economics in Australia estimated that such tasks swallowed up 16% of these employees’ time.

The Deloitte study reckoned that between 12% and 24% of these rules were “unnecessary or low value-added”. Take the mid-point: assume that 18% of these rules could be discarded without causing any corporate hurt. And accept the finding that 16% of non-managers’ time is spent complying with rules and regulations of all types.

Then apply those figures to the 111 million workers in the US economy who are not bureaucrats. (Again, this excludes agricultural and home workers and the self-employed who haven’t set themselves up as companies.)

The result is striking: 3.2 million person years are being wasted annually in responding to pointless bureaucratic requests. And if – as we suspect – the time spent complying with rules is in fact far greater, then the potential rewards of doing away with these time-consuming tasks are much higher. It is quite conceivable that as much as 50% of internal compliance activity is of questionable value. In that case, half of the 16% of time spent by non-managers on useless or virtually useless bureaucracy is non-productive – equivalent to 8.9 million worker-years or roughly $480 billion in payroll costs.

Add it all up. There are 21.4 million individuals in the US workforce – 12.5 million bureaucrats and the equivalent of 8.9 million paper-pushing subordinates – who are creating little or no economic value. The US could achieve current levels of economic output with 15% fewer members of the labour force. GDP per capital would rise from $120,000 to $141,000.

Of course, the goal is not to put 21.4 million people out of work, but to redeploy them into wealth-creating activities. If each contributed $141,000 of output each year, GDP would increase by $3 trillion.


Bureaucracy can be beaten


Bureaucracy is well-defended. Leaders who learned how to succeed within bureaucratic organisations are not eager to change the rules of the game. Bureaucracy is also, to an extent, useful – it has enabled human beings to master complexity at scale. Given this, what will it take to reduce bureaucracy’s hold on our organisations? Four things.

The first is a healthy dose of outrage. When it comes to bureaucracy, we need a little less resignation and a lot more indignation.

Bureaucracy is an unconscionable tax on human potential. According to a 2014 Gallup survey, two out of three employees are not “involved in, enthusiastic about and committed to their work and workplace”. Globally, 87% of employees are less than fully engaged. People show up to work physically but leave much of their creativity and initiative at home. In other words, most organisations waste more human capacity than they use.

The second prerequisite is data. Bureaucrats pay attention to things that can be measured. That is why every organisation needs to calculate its BMI (bureaucracy mass index). The first step is to establish a baseline. The goal is then to steadily shrink the BMI. It is crucial to make the costs of bureaucracy visible to the entire organisation as well as key stakeholders.

The third condition for progress is role models. Few of us have been inside of organisations where first line staff elect their own leaders, where strategy is crowdsourced, where every employee has the company’s cheque book, or where self-managing teams have done away with the need for a formal hierarchy. But these organisations exist and are consistently more profitable than their bureaucratic peers. To challenge bureaucracy, we must first believe that there are alternatives. Thankfully there are.

Finally, it is vital to confront the political and operational impediments to deep, structural change. Traditional top-down change programmes are powerless to uproot bureaucracy. What is needed instead is something more like a “hackathon”– an open, company-wide effort to reinvent the management model around post-bureaucratic principles such as trust, transparency, meritocracy, subsidiarity and experimentation.

The biggest risk to prosperity in today’s economy is a hierarchical model that undermines initiative and stifles creativity. But we are not hostages to precedent. Bureaucracy can be beaten – but only with an approach that is bold, iterative, collaborative and emergent.

How to break the stranglehold

A Bureaucracy Mass Index can be found at www.garyhamel.com/BMI

Visiting Professor of Strategy and Entrepreneurship