Can politicians offer hope for equality in Britain’s boardrooms? 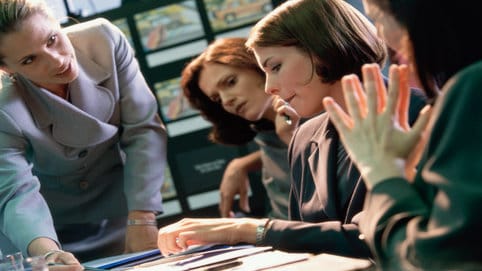 It’s 2015, but progress on gender diversity in high-level business may be in need of a jump-start.

Question marks are resurfacing over the rate of movement on pay disparity, equal economic participation and entrepreneurial opportunities for women.

As the May election looms, we look at the challenges of redressing the balance, while Isabel Fernandez-Mateo, Associate Professor of Strategy and Entrepreneurship at London Business School,  highlights the importance of transparency and the role big data can play in cracking the question.

Business Secretary Vince Cable says the evidence is clear: “Gender diversity delivers better business decisions which are vital to securing the future prosperity of the UK.”

But issues around family remain a traditional stumbling block in the way of women’s participation in the labour market.

The role of Government in setting levels of financial support and employment rights for mothers and families is understandably a hot topic this year.

Labour has made its stance clear. It understands family life has changed dramatically, with fathers far more involved in parenting and women in the world of work, and wants to distance itself from the “outdated” stances of rival parties.

Labour’s encouraging, if bold, proposals are to double the length of paternity leave granted to fathers from two to four weeks, while the level of pay received during this time would increase by £100 a week - from £160 to £260.

Labour also plans to extend free childcare to parents of three and four-year-old children, meaning people in this situation will no longer rely on benefits. In fact, The House of Commons library predicts that extending this allowance to 25 hours a week will reduce Government childcare spending through tax credits by more than £150m - the figure it estimates the additional paternity plans will cost.

Miliband’s party also recently issued a pledge to double the number of available places at Sure Start centres to at least 100,000.

Indeed the UK’s unadjusted gender pay gap has fallen significantly since 1997. But labour market statistics published at the end of 2014 remind us a 19.1% difference in median hourly pay between men and women is still high in European terms.

The problem underscoring this figure is that so many women remain trapped in low-paid, fragile employment situations - regularly in marginal, even zero-hours contracts.

So the relative pay gap is actually taking big strides in the right direction. But difficulties in reducing it further are the high proportion of women working in part-time roles, and the ongoing dearth of female representation in boardroom and C-Suite positions.

In the Department for Business, Innovation and Skills (BiS) report ‘Inclusive Support for Women in Enterprise’, a number of suggestions are laid out encouraging more women to fulfil entrepreneurial potential. Among these are building an evidence base on the importance of diversity in business, and ensuring diversity throughout advice and supply chains.

The report’s author and Government champion for women in enterprise Lorely Burt MP, says the rate of progress needs to be improved; the proportion of female business owners has increased from 14% to 20% since 2008.

Ms Burt knows increased Government attention can guide female entrepreneurship, but argues that as long as women own one in every five businesses, "untapped talent" will remain. She stresses the need to “break barriers” through better communication, speaking inclusively with women entrepreneurs.

Could Big Data crack the question?

Dr Fernandez-Mateo recently commented on the role of technology and business model innovation in balancing the boardroom, including the emergence of ‘Big Data’ measurement.

While such tangible tracking could prove revolutionary in helping women into lower-end employment, she believes benefits at a higher level may not be as instant.

“Big data can help in a very clear way - transparency,” she says. “All of the techniques we now have to evaluate which skills employers need, what kinds of traits they’re looking for - these can be made far more objective when measured and tracked with data.

“It can help mostly with entry-level jobs and increasing opportunities for people who might not have had a chance before. At the lower-end of jobs you’ll find a bias in interpersonal relationships, and once you have the hard data, this becomes less likely.

“At the top it’s harder. We know there’s a big problem with a lack of women at the top of big organisations - only 5% of top managers are women. We can think of data in terms of ‘performance’, but at leadership level it’s not so much about these objective measures.

“It’s more about relationships and interpersonal skills; conceptions we have about what a leader is.

“I think people are quite concerned about how we move from having only a 17% share of women at the World Economic Forum in Davos to having more, and most importantly, at the top of corporations.”

Last year it launched a competition with London Business School aimed at encouraging more women with ‘C-Suite’ potential into leadership positions . The prize, awarded to two outstanding candidates, was a £30,000 scholarship for the School’s Senior Executive Programme.

Now Andreea Moldova, General Manager (Czech Republic and Slovakia) at Avon Cosmetics, and Yasmin Becker, Assistant Director at the Nursing and Midwifery Council, are benefiting from expertise in the three key elements of success: strategy, leadership and transformation.

Success, of course, means different things to different people. And redefining success through the eye of the individual is the theme of the London Business School Women in Business Club's annual conference on 13 March.

As well as showcasing the success stories of real women leaders, at the heart of this year’s event is a shift in emphasis, aimed at taking us beyond an ‘us vs them’ mentality.

Partnership - rather than competition - needs to be supported between men and women, and among women, to assist diverse choices and ‘make it happen’.

All this has never been more timely. And, one way or another, how Britain votes this summer could have a significant effect on the progress of future female leaders.