Why flexible working is good for business

Flexible working is becoming a popular option as businesses adapt to new ways of working. But why isn’t it more widespread?

Hannah Marsh
Save to my profile

Previously looked down on by those who value in-office presence over employee output, flexible working is becoming a popular option as businesses adapt to new ways of working. But why isn’t it more widespread? 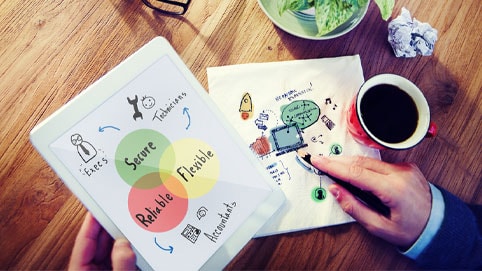 
One of the responses to these profound shifts is the idea of flexible working, with policies offering clear solutions to concerns businesses have over reducing carbon footprint, increasing sustainability, harnessing technology and retaining talent. But it’s an area that suffers from prejudice, from those who value in-office presence as the ultimate mark of employee worth to people who dismiss it as a ‘woman’s issue’ or whimsical demand of life/work balance-obsessed Gen Y.


But Professor Gratton says despite this, flexible working hasn’t taken off in the way she might have expected. “It’s worked primarily at low-skilled levels, but hasn’t really been adopted for senior jobs,” she says.


“Why? One of the reasons is seniority. There’s a view that if you’re doing a senior client-facing job or one with large numbers of people reporting to you, it’s hard for you not to be there either physically or at the end of an email.”


There are three key reasons why businesses have failed to embrace flexible working, according to Professor Gratton. “First, companies still tend to decide on a promotion depending on whether or not they see you around.


“Second, flexible working is still often seen as something you do at a certain stage of your life, particularly when you have young children. Once they’re at school people expect you to return to work.


“Third, for some types of work, particularly complex or creative work, there is a view that it’s really important to be physically there together.”


Professor Gratton sees two ways for organisations to face these challenges, although she admits she doesn’t expect flexible working to be widely introduced immediately.

“One way is senior executive role-modelling,” she suggests. “Most employees imitate other people. Humans are very imitative. So if you want flexible working it’s good if the senior executives do it.


“Secondly, pilots are important. BT ran a pilot on flexible working and they found performance went down at first because people had to learn how to work with each other. Then performance went up again and in some cases exceeded what it was before, so you have to run a pilot over time.”


Some of the keynote speakers at London Business School’s 2015 Women in Business Conference shared their views on why their organisations embrace flexible working..

Environmental, social and governance (ESG) are increasingly factored into the valuation and management of financial assets, according to London Business School Professor Ioannis Ioannou.


Professor Ioannou has written about how issues including sustainability, climate change and social responsibility are increasing drivers of firm value – thanks largely to investor pressure.


As CEO of Belu Water – an award-winning ethical business and social enterprise with a carbon-neutral footprint – Karen Lynch appreciates the eco-benefits flexi-working brings.


“We’re an environmental brand,” she explains, “which makes it really easy for us to say don’t travel unless it makes sense – why would you incur a carbon footprint?


“If everybody comes in every day, we need a bigger office that costs more, and every £15 Belu makes transforms one life long-term, so every £15 spent on floor space is money that could have genuinely made a difference.”


Professor Gratton recognises the scenario. “We did a case study with Unilever,” she says. “Bringing people into the office has a huge carbon footprint, so it makes sense to encourage them to stay at home or work in hubs.”

Belu Water has less than a dozen employees. But it punches above its weight – on World Water Day 2015, it announced £1 million of net profit donations to Wateraid.


How is Belu doing so well? Lynch thinks the company’s flexible working policy is an attractive proposition to highly-skilled workers who may be able to earn more elsewhere without the same benefits.


“A small business like Belu, with a few people who’ve decided to leave their comfortable corporate careers to make a difference, shouldn’t, in a tiny room in a backstreet of London, be able to compete with Evian and San Pelegrino.” says Lynch.


“If you’re trying to attract the talent you need, you talk about package. We’re not the biggest company, which means we need to bring in the right talent for the skills we need. Our package includes flexible and part-time working and being measured on your outcomes, not your outputs.”

It retains female talent – and saves on re-recruitment

Flexi-working is becoming less gendered. But when employers fail to be flexible, it’s still often women who step down. Money spent on recruitment and training is wasted when female employees leave.

“The cost of re-recruitment of bright women, who have to leave or take lower ranking or paid jobs because their family life cannot permit it, must be costing millions of pounds,” says Nikki King, Honorary Chairman and former Managing Director of Isuzu Truck UK.

“Companies should concentrate on retaining their talented women at 35, when they have young children, and make it easier for them to stay at work.


“Nobody at Isuzu Truck has to work from the office. We have women who’ve gone from full-time to working in the office half the week and the other half from home, to ensure we can keep them.


“Traditional models saw men work and women stay at home” she explains. “That’s really not the case now. Men are taking more responsibility for child-rearing, meaning they need flexibility, so flexible working has moved from being a ‘mummy thing’ to an ‘everybody thing’.”


“The world is changing,” says King. “Look at supermarkets; now we get Ocado deliveries – who wants to spend Saturday mornings walking round a supermarket?


“We have to get away from this idea that you have to have 150 people in an office to be effective. My entire customer service team work from home.


“The advantage from a business perspective is I don’t have an expensive call centre, I don’t pay rates, lights and electricity, and the quality of women working for me is phenomenal. A lot of my Customer Liaison Executives (CLEs) have become managers. They were managers before they had children and had to leave, which is nonsense. So they come to us as CLEs, their children grow up and they continue as managers.”

Marianne Abib-Pech is not an obvious champion for flexi-working – a self-declared workaholic, she was appointed CFO of Shell Aviation at just 35. Marianne now balances running two of her own companies with a third career as an author and writer for the Financial Times.


But she recognises the importance of being able to structure your diary around your priorities. “I do have a flexible working life because I have founded two very different businesses and I need to fulfil my creative needs through writing. All these activities require time,’’ she explains.


“So I juggle – and establish priorities based on what needs to be achieved immediately and what I need as a person. Deal closing sometimes takes precedent , while I’ll spend other periods focusing on LeadTheFuture (the leadership lab Marianne founded) because it’s important to me from an impact standpoint. Some days, I have an urge to replenish my creative side.


“What counts is being very clear about your working patterns, or what I call your performance band. When I was a CFO I would be very flexible with my team. It did not really matter when, where or how they worked as long as we were clear on the deliverables and the timing of those deliverables. I was very clear on deadlines and didn’t want last minute surprises. They were accountable for the ‘what’ and not the ‘how’.”

It can be done differently

The best flexi-working policies fit the company. One size doesn’t fit all.


While at Isuzu Truck UK every teacher’s strike day is a bring-your-child-to-work-day, investment banking has experimented with its own form of flexi-working in the shape of ‘returnships’ – or returning professional internships. The specifically tailored programmes typically take the form of a short-term consulting project, acting as a bridge for people returning to work following lengthy career breaks.


“They might decide, ‘Look, my children have grown and now I want to re-enter the work force, how do I go about doing that?’


“This goes for men as well as women. Flexible working hours are not just about whether a woman wants to work a certain way.”


Methods may differ, but the end goal is shared – to retain talent rather than forcing it out.


Little wonder then that when employers find a style of flexible working that fits with their ethos and business needs, they champion it as a benefit, not a hindrance.

Hi Hannah, very interesting article. Also I believe there's another aspect to consider which could affect the productivity at work. Nowadays we hear talking about offering a personalized experience to the Customers (e.g. tailored offering etc.) and I think to some extent the same concept applies to employees for the fundamental reason we're all different individuals. For example I think working from a different environment everyday would stimulate my mind, while working from the same place (work or home) could lead to performance decrease. Has this aspect ever been analysed? Thanks,