The Dolma Development Fund is changing lives in Nepal. Its founder Tim Gocher explains how.

London Business School
Sustainability
Save to my profile

The Dolma Development Fund is changing lives in Nepal. Its founder Tim Gocher explains how. 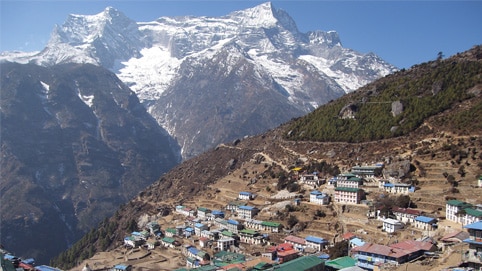 Bridim is a small village in Nepal. Its 42 houses are a four-hour trek from the last motorable road in Syafrubensi which, in turn, is an eight-hour bus journey from Kathmandu. The journey is worth it. From Bridim the visitor can take in an array of spectacular mountain views including Mount Langtang, 7252 metres high. The village is home to a girl called Dolma who will graduate from high school in 2013.

Dolma was nine years old when she and her family met a former investment banker, Tim Gocher. The meeting proved life changing — for all. Gocher’s experiences in Bridim and Nepal led him to create a non-profit impact investment and education sponsorship fund for Nepal. It was named the Dolma Development Fund (DDF) and nine year old Dolma was the first recipient of its support.

Launched in 2003, the fund’s mission is to “invest in and partner with commercially sustainable projects and businesses that unleash the power of the local entrepreneur to alleviate poverty by creating sustainable jobs and pride”. For Tim Gocher, development and sustainability are the twin peaks.

“Our Community Partnership Model is at the heart of what we do. These partnerships bring us close to on-the-ground needs and cultural sensitivities, while directly involving local people in the businesses and programmes we help create,” says

Tim Gocher. “Through donations and profits from our investments, the DDF provides full scholarships to children from remote regions.”

Gocher makes it clear that the benefits are not one way: “We live in awe of cultures leading timeless, peaceful lives according to the limits of the land. Such cultures have plenty to teach the West about true sustainability and lower-stress lifestyles. Thus our staff, investors and partners learn from our partner communities in a mutual exchange of human expertise.”

In 2012, in response to Nepal’s increasing prosperity and the rise of impact investment funds throughout the developing world, Gocher and the DDF (www.dolmafund.org) launched the Dolma Impact Fund I — the first commercial impact fund ring-fenced for Nepal providing growth capital to small and medium-sized enterprises. His team includes such figures as David Grigson (Trinity Mirror chairman and former Reuters CFO), Rameshore Prasad Khanal (former Nepal Finance Secretary), Ian Taylor (former UK Minister of Science and Technology) and Professor Michael Hay of London Business School. Dolma Impact Fund I will start deploying capital in 2013 with a size of up to $40 million.

The gap in the mountains

The Dolma model appears to fill a gap in the international development world. The profusion of Non-Government Organisations (NGOs) is a force for good, but doesn’t necessarily foster entrepreneurship and the private sector. Indeed, while most NGO projects are individually worthy, when they reach critical mass in a market, they can actually crowd out the private sector thus dampening sustainable prosperity. This is changing with groups like the UK’s Department for International Development leading the charge with its Private

Sector Development strategy, and Tim Gocher argues that a more enlightened approach to economic development lies in supporting the entrepreneur in challenging markets.

At the other end of the spectrum from NGOs, the world’s capital markets have found themselves contemplating previously ignored ethical issues in the wake of financial turmoil, recession and scandals.

“We operate at the confluence of those two worlds,” explains Gocher. “We invest for profit and help companies grow which sustainably creates jobs and income. At the same time, we only invest in businesses whose success will automatically generate a positive impact on society. My primary interest is in the fusion of the power of private capital with social and environmental outcomes. This is the impact investment model.”

In a previous incarnation Kuala Lumpur-based Gocher was an investment banker. He spent nine years at Deloitte and JP Morgan; was managing director of investment bank, Interregnum; and co-founded Academy IP, a New York-based venture capital firm. He has an MBA from London Business School. Gocher has the zeal of a convert but, he makes clear, he certainly hasn’t turned his back on capitalism. “What I'm trying to get to, simply, is the best way to do business. What is the most efficient way to generate broad-based prosperity? My passion is sustainable commerce.

“What many of today's businesses don't do well is to account for the full cost of risk. Who thought of society when they were overselling mortgages or fuelling sovereign borrowing? Who built in the costs to deal with the resulting crises? The community and environment around you are key business stakeholders, and their protection and benefit should be baked into business models from the start, not only enforced by regulation as with environmental protection studies. It's a different way of looking at it, and it's ultimately the best form of risk management. It's pragmatic rather than judgmental.”

Of course, on-the-ground projects are what any such fund should be measured by — ironic, perhaps, in a nation which is home to eight of the world's ten tallest mountains and which contains more than 240 peaks over 20,000 feet (6,096 metres).

One of the Dolma Development Fund’s (DDF) investments has been in a business called Dolma Ecotourism (www.dolmatours.com).  This was designed to help a remote community earn their own money to send their children to school and to help provide their own healthcare. It was founded as a partnership between an experienced mountain guide and the DDF. It takes tourists on adventure holidays to Nepal’s Langtang National Park, and now throughout Nepal, where they are hosted by local communities.

“Instead of just trekking through the mountains and taking photographs, Dolma Ecotourism customers are actually living among the people whom they know they're helping by coming on that tour. They get a much more intimate cultural experience as a result, and those cultures have vital lessons for our society. It's a great example of how the customer value proposition is enhanced by focusing on the society and the community, and therefore, it’s been a successful business. That's what I'm interested in,” says Tim Gocher.

The new commercial Dolma Impact Fund, the first fund of its type in the country, has a wide scope. It aims to offer attractive returns alongside sustainable development in Nepal — which despite recent progress and its staggering beauty — remains a poor country of 30 million people. The fund’s mandate covers sectors including education, healthcare, renewables, financial inclusion, water and agriculture. Further funds, Gocher anticipates, will have a more sector-specific focus. He points to the huge potential in hydro power (Nepal has 40 per cent of South Asia's water source, and potentially 83,000 megawatts of hydro-power — even though the power's now switched off most of the time) and in tourism. The inflow of foreign direct investment has been growing at an average annual rate of 27 per cent since 2006.

All of this has been played out to a backdrop of political upheaval. Nepal’s civil war is over but attempts to agree on a new constitution failed in May.

The bigger story is that if Dolma’s approach proves successful in Nepal it might be transferrable to other challenging markets. “Nepal? If I can make it there, I’ll make it anywhere,” says Gocher, once an expat in New York. “Investment in these so-called frontier markets requires a different investment process compared with developed markets. You particularly learn that legal agreements are not worth much. If you really needed to enforce something and take it to court, you've probably already lost the game. So first, you get to know the deal partners and stakeholders a lot better than you would in the West, and ensure a closer alignment of interest.”

“In that way, business is much more personal, which is no bad thing. You also can’t rely on quality data inputs, and so due diligence and post-investment asset management take a lot more hand-holding. This deal process is really our core competency and something that could spread across any frontier market. But, obviously, our focus right now is on getting the Dolma Impact Fund off the ground, making our first few investments and then making them successful.”