As faith in big business ebbs and flows, there has never been a greater need for companies to keep it real

In the early years of this millennium, the business sector became a punchbag for its detractors as fraud and incompetence brought down some of the world’s largest corporations. First there was the collapse of the energy giant Enron in 2001, closely followed by its “Big Five” accountancy firm Arthur Andersen.

Eight months later, WorldCom went bust, becoming the biggest corporate bankruptcy in American history. Fast forward six years to 2008 and there were two even larger insolvencies in the shape of Lehman Brothers and Washington Mutual. Just three months after that, Bernie Madoff’s $64 billion Ponzi scheme came to light. By now, of course, the world was in the grip of the greatest financial crisis since the Great Depression and trillions of dollars had been wiped off the global stock of consumer wealth.

No surprise then, to find that by 2012, faith in business leaders had fallen to an all-time low, according to the Edelman Trust Barometer. In that year, trust in CEOs plunged 12 per cent, the biggest decline in the index’s history.

Recent events such as the Volkswagen emissions-testing scandal and the exposure of high-level corruption at Fifa have again tested the public’s faith in big business.

The truth is that after decades of leadership education by business schools, the publication of endless leadership books by learned professors and consultants, and massive investment by organisations in leadership development programmes,, levels of trust in business leaders remains low

Meanwhile, the world is in the grip of rapid social change. People now coming into the workforce have very different ideals and aspirations from their parents. And they are working in a new knowledge economy where human capital is key.

Just as the public doesn’t trust corporations, more employees than ever before don’t like working for them. Study after study shows that employee engagement is at an all-time low, with many people finding their work alienating, frustrating and unpleasant. It is well-established that people who enjoy their work are more productive. Hence this is clearly a crisis that companies are keen to address.

How to be authentic


It is against this backdrop that the concept of authenticity has become a hot topic.

But what exactly is authenticity? The leadership slogan most commonly associated with the idea is “Be yourself”. But this is too simple: the term reveals an extremely naïve understanding of what good leadership might look like. If it were simply a matter of being yourself, who needs business schools, leadership books or in-house training? Our recommendation is different; we urge executives to “Be yourself, more, with skill”.

Much research into authentic leadership - and leadership in general - is dominated by the thinking of psychologists. But often this takes too little account of social context. After all, authenticity is not just a matter of the individual deciding who he or she is; it also involves establishing relationships in a particular context with other people. If you accept this, then simply exhorting people to be themselves is clearly insufficient. We play different roles in different situations.

But adapting one’s behaviour according to social context, does not mean abandoning authenticity. Think of a chameleon: it may change its colour, but underneath it remains the same. The chameleon adapts to its surroundings – and failure to do so would threaten its survival. But that doesn’t stop it remaining an authentic chameleon. 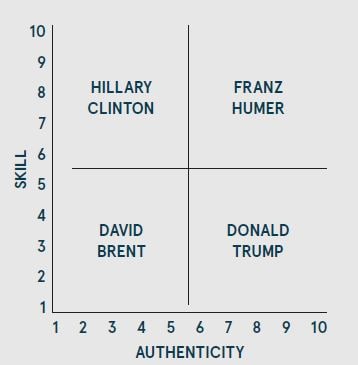 The graphic gives the picture. People who are true to themselves and have the ability to adapt to situations fit in the box at the top right: they are both authentic and skillful. Someone who lacks both qualities – David Brent of the TV series The Office would be an example – would sit towards the bottom left.

What about the other cells? To take a recent example, look at the two candidates for the American presidency. Donald Trump was seen as a maverick: he projected himself as someone who was true to himself but was seen by many as lacking the right experience and qualities to lead the most powerful country on Earth. For many Trump communicated an anti- Washington type of authenticity but was regarded as lacking requisite skills.

Hillary Clinton, on the other hand, slotted into the opposite corner: seen as not very good at being herself, but with a great deal of political skill.

So does any leader qualify for the high-skill, high-authenticity slot? Consider as a candidate Dr Franz Humer, former chairman of pharmaceuticals group Roche and until recently chairman of drinks giant Diageo.

Humer has an impressive track record of having run large and complex businesses. That ticks the skills box. And people who worked with him reported that he used his personal qualities – even including piercing blue eyes - to full effect when engaging with people with whom he was dealing. He projected himself as a man intensely interested in what the person on the other side of the table had to say. He used his authenticity skilfully.

To sum up: encapsulating the idea of authenticity in the glib phrase “Be yourself” is inadequate. Context and relationships also matter.

Can a corporation claim authenticity?

People will not follow a leader they feel is inauthentic. But more than that, they want to work for an organization that really stands for something. And clustered around that fundamental quality is a group of attributes that people cite as necessary if they are to feel that the organization is to be truly authentic. Recent research for our book “Why should anyone work here?” suggests that the qualities can be summed up with a handy mnemonic - DREAMS:

Take “Difference”. This is about more than encouraging diversity. The UK supermarket chain Waitrose is a good example. It goes to great lengths to draw out and support people’s personal interests. If an employee wants to learn piano, Waitrose will pay half the cost of the lessons. There’s a thriving club culture – cooking, crafts, swimming, and so on. Waitrose strives to create an atmosphere where people feel comfortable being themselves. One senior manager said: “Friends and family would recognize me at work.”

What about “Radical honesty”? No-one wants to work for an organization that keeps unnecessary secrets. (And in a the world of Wikileaks , whistle-blowing and freedom of information, there is an imperative to tell the truth before someone else does. Failure to do so can be catastrophic.)

“Extra value”: the relationship between employer and employee should be symbiotic. If an organization adds value to an individual by developing their skills, the individual will add value to the organisation. And this shouldn’t be limited to an elite at the top; it is an approach that should apply to all.

Then the core quality: “Authenticity.” There are three useful markers here. First, a company’s identity is rooted in its history and is consistent with that history. (No wonder employees talk despairingly when a mission statement is rewritten four times in three years.) Second, employees’ actions are aligned with the value the company espouses. And third, company leaders themselves must show authenticity.

“Meaning”: employees need to know how their work connects to that of others within the organization; they require a workplace that promotes a sense of belonging; and they must be able to see how their work contributes to a longer-term goal than simply completing the job in hand.

Finally, “Simple Rules”. In too many organisations, one set of bureaucratic instructions begets another. Rules should be as few as possible and should be sufficiently clear and simple to be absorbed and followed by all employees.

But return to the core idea – corporate authenticity. In persuading employees to demonstrate company values, few have done it better than the American insurance company New York Life. At a time when so many of its competitors were demutualising and listing on the stock market in an uncertain economic climate, it reaffirmed its commitment to its roots through the public assertion that it was “built for times like this”. And this approach was embraced by its staff. One New York Life insurance salesman recalled an illuminating story: “This is not a place where we wriggle out of claims. One man took out a life-insurance policy and went home to write out the cheque. It was on his desk when he died that night. The policy was unpaid but we paid the claim. The agents really buy into this.”

Authenticity must be embodied in the bosses too. Take Michael O’Leary of the Irish airline Ryanair. Whilst not always universally popular - with Ryanair what you see is what you get - and it’s absolutely a reflection of its plain-speaking chief executive. Although now shifting its position, for many years the mantra amounted to, “You bought cheap and cheap is what you got”. It was a genuinely authentic offering.

Work can be liberating. Or it can be alienating, exploitative, controlling and homogenising. The idea that successful companies must have a “strong” culture within which individuals either fit or do not fit looks increasingly questionable. Instead, organisations must adapt to the individuals they hope to engage. Authenticity is about more than being yourself. And success is founded on much more than conformity.

Great leaders are made not born. Join us to discover how to unlock game-changing potential in yourself and others with our dedicated short course.

Interesting analysis, enjoyable article, but beware of the final paragraph with the quotes around 'strong': do you want a culture that embraces and adapts to the needs of a bully, an abuser or a fraud? I would suggest a little more subtlety.