The quad effect: a framework to spot strategic customer segments

With hard work, strategy frameworks can provide a structure for developing insights as well as better communication and sharing.

Marcus Alexander
Strategy
Save to my profile

No one tool will give you all the right answers, or make the right decision magically appear. But models do help to structure your thinking. They push you to check assumptions and search for insights and explanations. When people are specialists in different areas it’s hard to pool knowledge and reach an overarching, shared view. This simple framework can encourage smart thinking on a broader scale.


This simple 2x2, four-box rectangle represents customer segments and their value. Some segments often seem more attractive than others, but initial views can be mistaken. 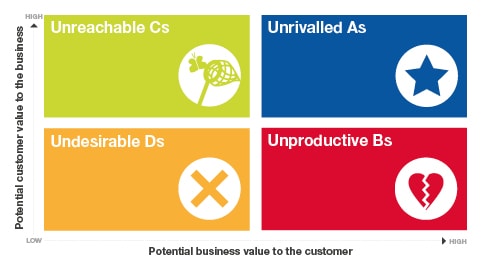 The horizontal axis represents the potential value of your business to a particular customer group – the likelihood the group will find your products and services attractive. The vertical axis demonstrates the potential customer value to the company – the customers that make it money over time. These are the segments, by box:

Unrivalled As – These are your star customers: they love you, you love them. Regrettably, we often don’t spend enough time focusing on this group. Time is well spent protecting them, making sure you understand their needs and developing solutions.

Unproductive Bs – These customers love you, but are a waste of your time. Your salesforce might find this group easy to sell to, but have you looked closely at their profitability?

Unreachable Cs – This group is of great potential value and you’d love to serve them. Unfortunately your proposition doesn’t attract them. The question here is: what could you do to bring them into your top-right box?

Undesirable Ds – These are the customers who don’t like you – and you don’t like them. However, when new entrants establish a foothold here, they may become direct competitors later. If you don’t pay attention, you can allow your rivals to reach a much stronger position to attack your other customers.


It’s important to have an understanding of current and potential profitability by each segment. This requires good knowledge of the costs generated across all departments – tricky when an accounting system isn’t set up to do that. It can also be easy to take the people who buy for granted, without really knowing why they do. Getting to the bottom of why they like what they like is hugely important.


Let’s take a real B2B business that provides machine servicing to explain. It was a firm – named Robofix for this purpose – gaining market share, but becoming less profitable. It was doing well and had increasing economies of scale, so what was going on? Using this 2x2 model, the first task was for executives to identify which customers were in each quadrant – a job in itself as people from different departments and functions had different views about how to slice the customer base. They eventually agreed that big customers were most attractive. But after interrogation the framework forced them to ask, “Was bigger really better?” The obvious answer was, “Yes!” One sale meant big business. But that forced out the question: “Do we always get big business from one sale?” After drilling down, the more astute answer was, “It varies quite a bit!” So the big business segment was spliced into subsegments: the ‘megafirms’ and the ‘minifirms’. The megafirms were big businesses that behaved like big businesses. As a result they were served by Robofix at much lower cost, justifying discounts. Minifirms were large companies that acted like lots of little companies. For Robofix, it was like dealing with 100 little people – services were booked by local units who paid individually, were geographically spread and had to be chased up for payment one by one. However, they were receiving megafirm discounts meaning they were highly unprofitable.


Mega and minfirms were both thought to belong to the Unrivalled A quadrant, but now it was clear that minifirms were really Unproductive Bs. This led to new thinking about how to treat such customers.


Next up, the framework drew attention to the smaller customers, apparently Unproductive Bs. Again, after interrogating why they seemed less attractive, people on the technical side said, actually, there are many smaller firms where the machine usage seldom causes any servicing problems (yet we charge them the same). So they overcharged the customers who never asked for help and undercharged the ones that needed help time and again.


Eventually they identified a few end-user industries where the level of help needed was low. Three of those customer segments suddenly looked much more attractive than customers who needed help because of their usage patterns. The process changed the way Robofix segmented its market. It began targeting lower-cost-to-serve people by giving them better deals and adding more value to become a more attractive supplier.


Finally the framework highlighted the importance of customer lifetime value (CLV). It encouraged new thinking, “We serve small businesses now, but they can become big if they’ve got the right characteristics. If we look after them, we can grow our business with them, at low cost.”


By using customer knowledge to spot the companies that should do well in the future and focusing your efforts on converting them early on you can often tie in hidden areas of growth.


What do customers really want?


As a by-product of talking to people and finding out what customers wanted Robofix reassessed its service policy for breakdowns at remarkable speed: within two hours. It discovered that 80% of customers didn’t care so much about a two-hour response service. It could have been the next day or even the day after that; most important was to know exactly when the engineers would come. This insight sparked an important shift – by creating new software they were able to guarantee a specific timeslot at lower cost: less expensive, more valuable, and to charge a premium to the 20% of customers who really did need rapid response.


An important part of the process was working out the actual cost of serving different customers. Another was placing a value on them that translated to other departments, such as sales. Robofix’s salesforce knew they had a much better chance of reaching their sales targets and getting their bonus when they sold to ‘easy’ customers. In order to change that bias, the company set up a new points system for customer targets – with different points for different segments. This incentivised the sales team. It was hard work at first, but gradually the team worked out they could make more money by targeting customers valuable to the new organisational strategy than they could with ‘easy’ customers.


In all walks of life people make biased assumptions. In this example, realising bigger wasn’t better and that not all customers needed or valued the same things was key. This framework is one of many to help you make smarter decisions. But before using it remind yourself of the entire quad effect, starting with four traps that could misguide your strategy from the start.

Adjunct Professor of Strategy and Entrepreneurship

He teaches on the following programmes: