The great pretenders: the magic of luxury goods

Bernard Catry
Strategy and entrepreneurship
Save to my profile

Luxury goods offer quality, emotion and rarity, observes Bernard Catry. But how can this scarcity be maintained while, at the same time, expanding sales into emerging new luxury market segments? Luxury goods companies are not selling rare and exclusive products. But, like magicians, they are adept at pretending to do so by offering an illusion of scarcity. 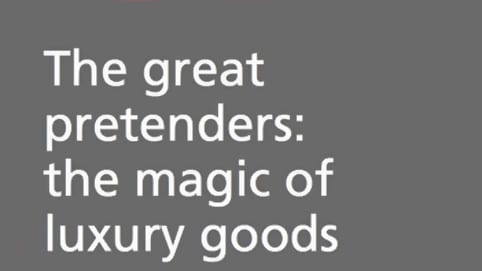 Rarity and luxury are fragile things. Cartier, the Richemont subsidiary, has in recent years not enjoyed the double-digit growth common since the 1970s. Part of the blame for this has been put on the Must label, which was introduced in 1973. The label was intended to rejuvenate and enlarge Cartier’s customer base through a more accessible entry line. Offering an affordable image and wide availability, Must was a huge sales success.

Along the way, however, Cartier may have lost some of its luxurious allure. Aware of this, Cartier reduced the number of Must references, narrowed the number of points of sale, in particular with duty free operators, and opened a “Private Collection” department for high-end watches. All this was aimed at reintroducing the notion of scarcity that wealthy customers presumably desire.

All companies in the luxury goods market face the question of whether exclusivity, so central to luxury appeal, is inevitably diluted by increased market share. The Latin etymology of luxury means difference, departure, deviation. When they buy luxury products customers distance themselves from the mass and from one another through the emotional value of acquiring wellcrafted and rare objects. So, is the notion of widely sold luxury goods an oxymoron?

This question is increasingly relevant. In developed countries middle-class households with growing incomes have begun to shop for brands that were previously seen as out of reach. Globalisation has also fuelled this growth. Though potential customers may come from different parts of the world, their tastes are increasingly similar. The luxury industry has been tempted to meet this new demand, not least because many small luxury goods producers are now part of conglomerates such as LVMH and Richemont, which must chase sales to mortise their investments and ever-growing marketing and distribution costs.