Attracting talent in emerging markets has always been a challenge for Western multinationals... 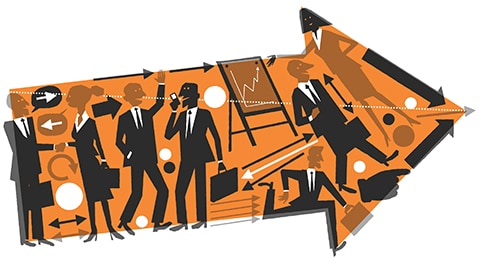 While only seven per cent of Western firms generate half of their revenue or more from emerging markets today, that number is set to reach 38 per cent by 2020. Historically, Western firms have enjoyed a considerable hiring advantage in emerging markets over domestic companies and government organisations, and were once considered to be the epitome of status and superior career prospects. Post recession however, these companies are struggling to retain their dominance as the employer of choice in key markets including China and India.

CEB has been collecting data on employees and candidates in China and India over the past five years, surveying more than 300,000 employees and working with HR teams at more than 60 companies. In 2008 our research found that 42 per cent of highly skilled Chinese professionals preferred working for Western multinationals. By 2010 however, Western companies’ hiring advantage in China had been halved, with 24 per cent favouring employment with a multinational company.

While the preference for multinationals among Indian employees is declining, a higher number of candidates still prefer to work for them than in China. In 2008, 55 per cent of high-skill Indian professionals preferred working for a global company. By 2010 the preference for employment with a multinational had shrunk to 37 per cent as both domestic Indian employers and state-owned enterprises have become more competitive in the eyes of Indian job seekers.

The global downturn has played a crucial role in helping domestic employers steal a march on their global rivals. Memories of the downturn and the impact this had on many major international players has diminished their brand stature, leading a growing proportion of high potential Chinese and Indian workers to view domestic employers as a more attractive — and secure — option.

In China in particular, Western firms and their brands took a significant hit during the financial crisis as Chinese economies and local career opportunities continued to grow despite the ‘global’ economic slowdown. Because China was able largely to escape the immediate effects of the financial crisis and continued to grow in comparison to other leading economies, highly skilled Chinese employees saw this as a powerful reason to engage with domestic companies over those headquartered in the West.

At the same time, domestic employers in India and China have become far more competitive in attracting talent.

Multinationals are finding it increasingly difficult to fend off this attack by domestic companies. In China for example, candidates are seeing, or at least reporting, favourable perceptions of Chinese private sector organisations, in terms of their size, their product maturity and their brand strength.

More importantly, employees and candidates are also viewing large domestic employers as good sources of career development and long-term career paths, which was not the case before the financial crisis.

Essentially, Chinese companies are now viewed as equal to multinational brands in terms of employment preference. While Western companies were trimming the fat, pulling back on recruiting efforts and in many cases laying off employees, Chinese companies continued to hire and began providing many of the advantages multinationals had become known for — developing opportunities within a fast-growing company and regular promotions, from the comfort of home.

Coupled with the belief that local companies offer more compelling career opportunities, Western companies have been losing ground to their domestic competitors.

This supports a preconception held by many Chinese workers that a glass ceiling exists for them in multinationals because desirable senior level positions within the company are and will continue to be held by Western expatriates. These concerns, together with the spirit of national pride employees feel when working for a domestic employer, put Western companies trying to compete for talent in a precarious position.

For those companies looking to grow aggressively in Asia, these findings have important implications. These companies are already struggling to find people whose skills fit the roles that will ensure that the business can fulfil its growth strategies both at home and overseas, and the benefits that have been historically most attractive to talent in emerging markets are no longer unique to them. The fact is that many domestic employers can match or beat their offer.

Crucial for these companies will be to differentiate their employment offering as their talent is aggressively courted by rival organisations.

In an effort to cement their leadership position, a number of Western multinationals are re-evaluating their recruiting strategies to secure their position as the employer of choice.

Best practice companies are demonstrating the benefits of a career within their organisation. They are talking recruits through different options for their development to ensure that they can see themselves engaged with the company over the long term, and to debunk the myth of the glass ceiling by articulating a clear career path. By focusing on key employment attributes, multinationals can compete and potentially regain their convincing status as the employer of choice in Asia.

Brand perception has a key role to play in this. The companies most successful in recruiting and retaining talent are focusing on communicating the long-term stability and future prospects of their organisation, their commitment to operating and investing in the local marketplace and their emphasis on individual employee development.

These companies are also creating positions that address the increasing desire of local workers to remain in their home country while advancing their careers. Traditionally, employees in emerging markets have sought roles that take them overseas, viewing such opportunities as highly prestigious but with the growth of China, many are expressing a preference to remain in their home market, leading multinational companies to rethink their relocation policies and where they base senior roles.

Being smart on pay also puts Western companies at an advantage. While a domestic employer will likely lure top Chinese talent away by offering huge salary increases, money is not the only factor. In India, for example, local organisations now offer employment conditions and opportunities equal to and, in some cases, preferable to global organisations. This has led to a dramatic increase in positive perceptions of the Indian government and state-owned enterprises sector.

Companies should determine how much they are willing to invest financially to retain employees, but consider also how best to position other attributes of the company that make it an attractive place to work. In China companies should focus their employment brand around the benefits they offer, such as health, retirement and vacations which is an area of dissatisfaction for employees at Chinese domestic firms. In India, multinationals can effectively compete with government firms by differentiating on salary, meritocracy and respect.

It is also important that companies establish a local presence and local relationships. By forming strong relationships with local suppliers, partners and community organisations, companies can build a quasi-local brand.

Given that inflation is rising and growth is slowing in China, the rise of the local Chinese company as the employer of choice may be temporary, but in the short-to-medium term it presents a very real threat to Western multinationals’ ability to recruit effectively and risks preventing them from executing on their long-term growth strategies. Companies vying for talent should be aware of, and proactive about, this emerging trend and will need to be prepared to invest more and fight harder to acquire and retain talent.