What impact will significant improvements in life expectancy have on our savings and how should we approach the challenge?

Over time there have been very significant improvements in life expectancy. The fact that we are living longer is good news, but it also means that much higher savings are needed to fund retirement. What’s the best way to approach this challenge and maximise your later life income? Professor Joao Cocco explores the subject.

What is the full impact of this increase in longevity? To measure it, it’s useful to look first at what the increases in life-expectancy are – and what the projections are into the future.

Less salient in this figure, but also important, are the significant increases that have occurred in life expectancy at age 65 that have occurred particularly over the last three decades of the twentieth century (and that have continued into this century).  From 1841 until 1970, the age 65 life expectancy of an English female increased by an average of 0.03 years per calendar year. The corresponding value from 1970 onwards was 0.12 years per calendar year.

Life Expectancy at selected ages for England and the United States 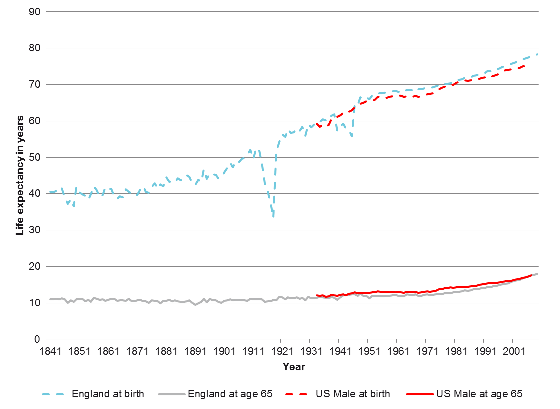 To get an idea of the magnitude, consider a fairly-priced annuity that pays £1 in real terms per year as long as the individual is alive. Assume that real interest rates are 2% per year. The price of such an annuity for a 65 year old English male would have been £10.5 in 1970, but it would have increased to £12.8 for a 65 year old male in 2000. The increase of roughly 22 percent is the extra assets that the 65 year old male in 2000 would have needed to finance the same level of yearly retirement consumption (the difference arising solely to the higher longevity)

Looking to the future

While Figure 1 looks at the historical evidence, Figure 2 plots projections for the future improvements in life expectancy.  More precisely it shows the projected increases in age 65 life expectancy from 2007 onwards (the year in which the projections were made by the UK Government Actuaries Department and by the US Social Security). The figure plots principal/intermediate projections and high and low improvement projections.  It shows that the improvements are expected to continue (although the UK GAD principal projection is clearly more optimistic than the US Social Security intermediate projection), and that there is considerable uncertainty with respect to future improvements. Those affected by the large realized and projected increases in life expectancy include a very large number of individuals, companies, and also the government.

Individuals are affected because they need to save more for retirement. Companies (including, but not limited to insurance companies) and the government are affected because they have made pension promises that are similar in nature to the annuities already described.. And if the government is affected, the effects are also likely to be felt by taxpayers at one point or another.

How did we get here?

Figures 1 and 2 clearly show that the improvements in life expectancy have taken place over a number of decades. Therefore a natural question to ask is why has the problem become so severe?

One answer is that the problem has always been there, but that the failure to use up to date longevity assumptions in the valuation of pension liabilities and the use of overoptimistic pension asset return assumptions contributed to concealing it. And naturally the very low interest rate environment that we live in, with negative real interest rates, has significantly aggravated the problem (the value of the real annuity previously described would have been £15.6 in 2000 for a real interest rate of 0%).

The natural question to ask is what should be done going forward. This is a question that Francisco Gomes and I address in “Longevity Risk, Retirement Savings and Financial Innovation.” We use historical data and projections on life expectancy to parameterize the stochastic process for future improvements in life expectancy. We then solve the problem of an investor trying to save for retirement and facing this longevity risk.

In our model the individual can insure against longevity risk through saving and dissaving and by retiring at a later age. We show that both insurance mechanisms are important for dealing with shocks to life expectancy. More precisely, agents in the model will optimally choose to save more and to retire at a later age when there are large life expectancy improvements. This is in spite of the fact that retiring later comes at a cost, since in our model there is disutility from work.

Saving and working for longer before retiring in response to longer lives is part of the solution. But those preparing for retirement also need to decide which assets to save.

There are several important investment principles that should be followed. First, investors should hold a diversified portfolio, as there are significant benefits in reduced portfolio volatility from such diversification. Second, investors should look for funds with low fees, since large fees can significantly affect portfolio performance. Third, investors need to take into account their own risk preferences in evaluating how much risk to take in their portfolio. Fourth, investors need to take into account their existing assets (human capital, real estate, family businesses, etc.) and look at how their existence affects the risk that they should take in their portfolio of financial assets.

Human capital is for many individuals their single most important asset.  It can be thought of as being equal to the present discounted value of future earnings or labour income, with the earnings being the dividend received from the asset. Human capital is risky. Individuals face career risk and also temporary shocks to their earnings.

An important question is how the presence of this important asset affects the optimal portfolio allocation between stocks and less risky financial assets such as bonds. This is a question that Francisco Gomes, Pascal Maenhout, and I have addressed in “Consumption and Portfolio Choice Over the Life-Cycle.” In this paper we have used data on earnings to measure the risk inherent in human capital. We then solved a model of optimal portfolio allocation when individuals are endowed with such human capital.

Interestingly, we found that even though human capital is risky, for most individuals it resembles more bonds than stocks. This means that early in life, when the value of human capital is high, investors should optimally tilt the composition of their portfolio of financial assets to stocks (as they already have many bonds in the form of human capital).

As investors’ age and the value of human capital is reduced, the investor should reduce the portfolio allocation to equities and increase the allocation to bonds and cash. These model results provide a theoretical foundation for target-date funds that have become increasingly available.