Isabel Fernandez-Mateo’s research looks at why there are so few women at the top.

Isabel Fernandez-Mateo’s research looks at why there are so few women at the top. Early findings showed a surprising lack of discrimination when it came to search firms hiring C-suite level women – which suggests the glass ceiling starts a lot earlier in the chain. Here, she tells Stuart Crainer why top-down action is not necessarily the way to improve gender inequality. 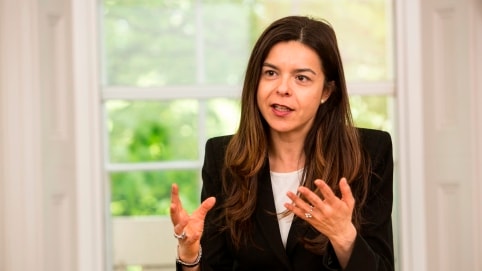 I’ve worked on the issues of gender inequality in the labour market for many years – and particularly on the role of what we call labour market intermediaries. I’m looking at the kinds of barriers that prevent women advancing to top management positions. So I’ve looked at placement agencies, temporary help agencies and the different issues in matching people to jobs and whether they play any role in helping women into different jobs than men.

My previous research had studied temporary workers and staffing firms, which is a way of finding out whether employers play a role in gender inequality or diversity. But I then became more interested in the very top of the labour market and the role of executive search firms. When they talk about why there are so few women at the top, immediately the media discourse turns to search firms and the need to get them to provide female-only shortlists. They talk as if search firms are the ones keeping women out of the best jobs.

We got data from one executive search firm. Nobody has got this kind of data before as they’re understandably very secretive, but I have five years of data. For this project I am working with Roberto Fernandez, a professor at the MIT Sloan School of Management, and we are analysing how the search firm selects candidates for top management jobs.

We found that executive search firms are slightly less likely to interview women, but the bottom line is that when women have made it to C-suite level they are not less likely than men to get the jobs on offer. All the action happens way before. Trying to solve the problem by attacking it from the top is not very helpful; it should be done way earlier if you want to make a difference.

It was not what I was expecting. The idea of the glass ceiling is that the barriers become higher the higher you go up the organisation. This means that women cannot get beyond a certain level and are going to experience even more barriers at the top than they would below. Our research suggests that this is something of a simplification and, at least with the data we have, it doesn’t look as if headhunters contribute significantly to the problem. To emphasise, we’re looking at C-level and board level appointments, the very top jobs. Women in this market are around ten per cent on average but with CEOs it is only five per cent. It’s important to remember that although they may be fairly recruited, there are not many women at that level to begin with.

We have also found that when headhunters hire – rather than firms hiring directly – it doubles the number of women hired. The search firm placed 12 per cent of women in jobs. The companies themselves placed six per cent and that was when they were hiring externally, but if they were promoting they were actually promoting even fewer women.

These are preliminary findings, but they do suggest that we really need to take a look at how companies promote people, and women in particular. We, of course, need to look at how general these results are, but it looks as though women are hired externally but then don’t seem to be being promoted at the same rates. Much of the discussion in the last few years has focused on hiring women – making sure that search firms provide female-only shortlists and so on. But what about if women aren’t then promoted once hired? There seems to be something of a fork in the road in terms of women’s careers. I now want to go into companies to investigate further.

In terms of changes that I’d like to see, I would like to see more transparency in promotion processes. There is a lot going on in firms that we just don’t know much about so I would like to know more about how jobs are filled, why women are dropping out, if they are. I think the trouble is we don’t have good evidence to know exactly where the problem is so I find it very difficult to come up with a solution beyond wanting to know what’s really going on.

As an academic, I have a very modest role and goal. We need to know what the problem is so we can take action. And unless we know where to look, where in the process the bias happens, we’re just guessing. The job of academic research is to provide the evidence. When you actually look at the whole process of recruiting and also promoting women there is already consistent evidence that most bias happens at the very beginning of the process rather than at the end. I am optimistic that change will take place, but it’s going to take a long time and incentives need to be in place to really make a difference.