Leading across cultures: bringing out the best of all worlds

Randall S Peterson
Leadership
Save to my profile

Good leadership looks different around the world. While every team has to achieve certain standards to be successful (such as effective information sharing), culture determines the approach. Why do so many teams fail to collaborate and pool their collective brainpower? The level of international literacy among team members and their leaders is critical to success. The advice for leaders in China isn’t the same as it is for those in the Middle East. And advice for their teams is different again.

For instance, take a look at this. 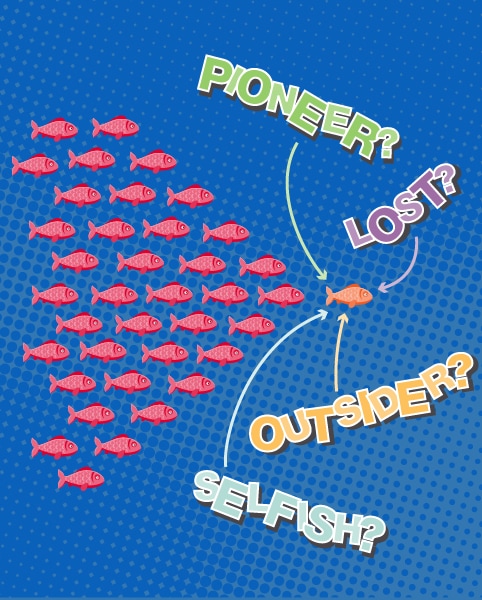 The way you perceive this golden fish that’s swimming ahead of the shoal is guaranteed to vary depending on your cultural viewpoint.

Anglo managers – broadly including the UK, North America, Australia and other English-speaking nations – often view the golden fish as the pioneering leader, leading from the front, making them individualists. Their Japanese counterparts tend to believe it’s a metaphor for a cohesive team working together behind an individual who may or may not be relevant to the team, making them collectivist leaders. For Singaporean managers, it is also about the power of a cohesive team, group coordination and action. They believe the solo fish is selfish because it’s preventing the chasing shoal from overtaking. Finally, their Nordic peers oftentimes see the shoal bringing the leading fish back into the group, with every member working together to create an effective unit. It is about lowering social distance between leaders and their group.


The role of power distance


Leadership is driven by a combination of competence, power and attraction. But bridging cultural differences demands emotional intelligence. The key is in bringing these components together. Dutch psychologist Geert Hofstede’s work on cultural dimensions found that power is often distributed unequally – called “power distance”. High-power distance means that the leader has more power. Low-power distance means that the leader has less power. Some cultures accept a higher degree of unequally distributed power than others. Today, Hofstede’s findings are too simplistic. The interplay between leaders and their team members is more nuanced and less one-dimensional. For example, it’s puzzling to think that managers in the Middle East and China, which are both high-power distance cultures, operate in the same way. They don’t, and here’s why. 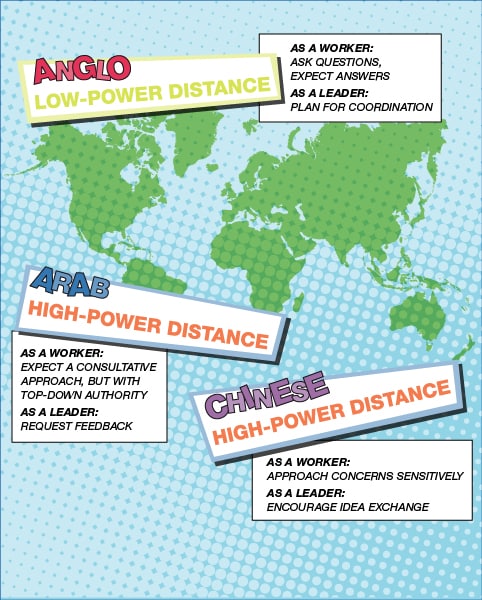 
Power distance is low in the US and UK. People here belong to a culture where individual rights and freedom of speech are rooted in the culture. It means people are prone to question. And because they’re highly individualistic, they tend not to join together and move in the same direction.

As a worker: you have the right to question your boss. In fact, it’s almost a moral obligation to question them if your find their request unethical. Fight for the power to achieve your goals. Show your professional strengths and speak about your personal values. Above all else, be honest.

As a leader: you will find people speaking out loud about their beliefs, muddying the traditional lines of hierarchy. Confronting authority is expected. It’s ill-advised to make a decision independently as people will invariably question it. Instead, focus on how you plan to lead your team. Your biggest challenge will be coordination: ensure you’re allowing enough discussion about goals and processes. Clarity in purpose can transform a group of distinct individuals into a high-performing team by uniting them and driving them towards the same overarching ambition.


In the Middle East


Power distance is high in the Middle East – but this definition isn’t necessarily helpful in the Arab world. Yes, leaders do have tremendous decision-making power. However, unlike in China, leaders are also expected to consult at lower levels. In some ways, the Koran demonstrates this by suggesting that a leader has a moral obligation to consult their team before exercising power. Leaders are also expected to resolve disputes as well as make difficult decisions.

As a worker: expect a top-down approach, but be prepared to share your view when you’re consulted. Invest in building a long-lasting relationship with your manager. There’s a tendency to avoid uncertainty so your perspective may be called on when change is underway or in turbulent times.

As a leader: you’re responsible for consulting your team, do so genuinely. Hierarchy is embedded in your culture so try hard to adopt a more inclusive style of leadership. Honour is important to you but that can make you proud and come off as defensive. You will rarely get feedback as a leader in the Arab world unless you ask for it. So the leadership rule 101 here is to request feedback.

Good leadership looks different around the world. While every team has to achieve certain standards to be successful (such as effective information sharing), culture determines the approach. Why do so many teams fail to collaborate and pool their collective brainpower? The level of international literacy among team members and their leaders is critical to success. The advice for leaders in China isn’t the same as it is for those in the Middle East. And advice for their teams is different again.


China has a high-power distance culture. Workers are discouraged from challenging their leaders or voicing dissent. Groups in China are more collectivist, which means that it’s harder to be an individual. Can you spot the worker beside you who’s a big-picture thinker? Who in your team is the most technically-orientated? You may not know, but it’s worth finding out.

As a worker: cohesion and fitting-in matters most here. You may be operating in an environment where it’s culturally hard to speak up, where your perspective could undermine the credibility of the whole group, so consider how you address issues. Most important, be sensitive to the idea of harmony and balance.

As a leader: if you don’t ask, you don’t get. Leading teams here is quite a balancing act: you have to ask questions to get information from people. If you ask too many questions, you appear weak and undermine your own legitimacy. If you ask too little, you don’t encourage new thinking. Keep in mind one core thread: how do I pull people together?

When leading a multicultural team made up of members from the US, China, the Middle East and beyond, you have the potential to bring out the best of all worlds. But remember, there’s also the potential to spiral downwards in a cycle of cultural misunderstanding and poor performance. For the best results, foster a growth mindset, where misunderstanding is an opportunity for learning, not for assigning blame.

Transform from a contributor to a high-performing leader, and make the best possible start to your leadership journey with our short course.

thank you sir this article was very helpful for understanding different styles of leadership across the world . can you please write an article on indian way of leadership in business.