Groundbreaking new research by Elroy Dimson, Paul Marsh and Mike Staunton challenges how we think of industries and where best to invest.

Groundbreaking new research by Elroy Dimson, Paul Marsh and Mike Staunton challenges how we think of industries and where best to invest. 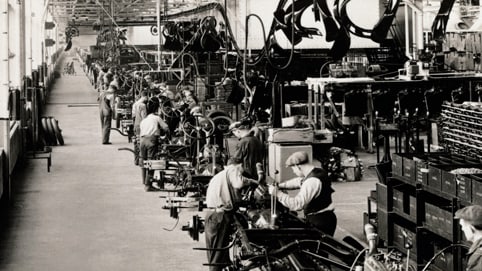 Industries have long been a short-hand for understanding the business environment.  Check your investments in a newspaper and companies are helpfully grouped under leisure, banking, technology and so on.  Of course, companies and industries come and go.  New industries emerge and old industries wane and sometimes disappear entirely.

The received investment wisdom is to invest in companies in emergent industries.  Amid the excitement and fanfare of glorious IPOs that is where the investment money is made.  Forget about the slow moving, dust gathering, behemoths of yesteryear.

Before you bet the house on a company which has an incredibly clever gizmo all but certain to revolutionise our lives, it is worth referring to new research by Elroy Dimson, Paul Marsh and Mike Staunton of London Business School.  Published in the Credit Suisse Global Investment Returns Yearbook 2015, their research tackles some investment orthodoxies.

A 115-year dataset underpins the Yearbook. The three authors report that, notwithstanding a strong recovery since 2009, world equity performance has still been disappointing since the start of 2000, especially relative to bonds. However, over the long run, equities have beaten inflation, bonds and cash in every country with a continuous 115-year history.

They suggest that investors tend to over-value the new and under-value old industries.  Dimson, Marsh and Staunton suggest that although successive waves of new technology have transformed the world, investors have not always been the main beneficiaries.

Stock markets in 1900 were dominated by industries such as railroads which today have small weightings or are extinct. Meanwhile, today’s markets have high weightings in industries that were small or non-existent in 1900, such as information technology, telecommunications, aerospace, oil and gas, pharmaceuticals and biotechnology.

The research shows that US railroad shares outperformed the market over the last 115 years, while investment in new technologies has sometimes frustrated investors. The reality is that stock returns tend to be higher for seasoned stocks, with older companies outperforming newer ones.  Longevity pays off.


For investors the solution is not to rush from the latest IPO and plough every penny into old industries.  To generate a premium they should rotate the industries in which they invest.  This takes advantage of the fact that there are periods when growth industries are over-valued (witness the dot-com bubble) and periods of undervaluation for value industries.


Paul Marsh, Emeritus Professor of Finance, London Business School, notes, however, that: "Momentum appears to be an even more effective industry rotation strategy. Buying last years’ best-performing industries while shorting the 20 per cent of worst performing industries would, since 1900, have given an annualised winner-minus-loser premium of 6.1 per cent in the USA and 5.3 per cent in the UK. Before costs, US investors would have grown 870 times richer from buying winning industries rather than losers."

Helpful, Dimson, Marsh and Staunton suggest that in the United States, the industries to look out for this year are utilities, insurance, healthcare and transport.  In the UK they include pharmaceuticals, life assurance, utilities and tobacco.

The wages of sin

Which brings us to the other eye-catching conclusion from the research: when investing it is more profitable to put your moral or any other scruples to one side and invest in sin industries such as alcohol and tobacco.


This flies in the face of the growing interest in responsible investing. Investors are increasingly concerned about social, environmental and ethical issues, and asset managers are under pressure to be responsible investors. This can take the form of “exit” via ethical screening, or “voice” through engagement and intervention. ”Exit” typically involves excluding companies, industries or countries regarded as distasteful or unethical. However, principles can have a price, since sin stocks may perform well, as illustrated by the strong historical performance of the Vice Fund.

Dimson, Marsh and Staunton’s research is sobering.  It found that the best-performing industries since 1900 have been tobacco in the United States and alcohol in the UK. They review other research studies that confirm the superior long-run performance of sin stocks, and during recent years, they find better returns from the most corrupt countries.

Elroy Dimson, Emeritus Professor of Finance, London Business School and Chairman of the Newton Centre for Endowment Asset Management at Cambridge University, suggests that: “Ironically, responsible investors may be partly responsible for the higher returns from sin. If a large enough proportion of investors avoids sin businesses, their share prices will be depressed, thereby offering the prospect of elevated returns to those less troubled by ethical considerations.”

The research reports that the expected financial impact of modest exclusions is generally small. They find that use of “voice” can pay, whether the focus is on environmental and social issues or on corporate governance. Engaging with companies owned by the investor is shown to be profitable in a number of cases, especially when action is coordinated with like-minded activists.