How to set up a social enterprise

Why The Big Issue, a magazine distributed by people facing extreme poverty, is a business, not a charity

Kathy Brewis
Save to my profile

Why The Big Issue, a magazine distributed by people facing extreme poverty, is a business, not a charity 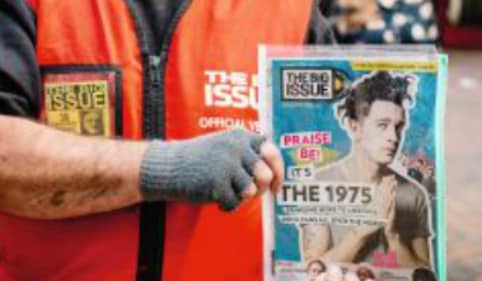 "I'm pretty good at keeping costs down,” Lord John Bird tells a room-full of London Business School (LBS) students. Nowadays Lord Bird is a well-known entrepreneur and respected member of the House of Lords. In 1991, when he launched The Big Issue, a new magazine distributed by vulnerable, mostly homeless people, he was a former rough sleeper taking a big risk.

He was homeless at age of five, in care from seven to 10. He learnt to read in a boys’ prison when he was 16. He regards all of this as harsh training for his later success. “If you’re a beggar, you need a USP because you’re desperate. I’d tell all sorts of fibs to get money out people. When you hit poverty, the first thing that goes out the window is truth.”

He’s amusingly candid about the reality of starting up a new venture. “A lot of it is about bullshit. Rockefeller was famously asked, ‘Can you tell us how you made your money?’ ‘I can tell you everything I know except for the first million,’ he replied. Why? Because it’s telling people you’re calling from a big office when you’re really calling from a public phone box; saying you have a million of these products when you only have one.”

A problem-solving mentality is key

What are the key skills people need to start a social enterprise? “Curiosity, a sense of adventure, enjoyment in looking at an issue and trying to understand it. We need more enterprise but also more social literacy. It doesn’t matter what your schooling tells you. You need to be able to get on with people and to have a problem-solving mentality. You sometimes have to say: ‘Today is a day for solutions.’”

And you need a stroke of luck. It so happened that Lord Bird had struck up a pub friendship with a man called Gordon Roddick in the 1960s. In the early nineties, Lord Bird was working as a printer and Roddick had become a wealthy, famous businessman thanks to the Body Shop , which he had co-founded with his wife Anita. “If you meet someone with a shedload of money, stick to them,” he chuckles.

The Body Shop Foundation agreed to fund the first year’s start-up costs, estimated at around £30,000. Roddick was convinced by Lord Bird’s determination to make it work when most people thought the idea was crazy. “You know nothing about business,” said Roddick. “I know how to survive,” Lord Bird replied.

Make a to-do list. Do it. If good, repeat

John Gilligan, Sloan Fellow and non-executive director of Big Issue Invest, who was invited to organise the LBS event – during which he took Sloans through The Big Issue as a case study – describes Lord Bird as an “inspirational, autocratic leader with strong motivation and relevant knowledge.” The purpose was inherent, here was no need to sit down and work out a mission statement. “The vision was taken for granted. What was important was what they were doing.”

In the early days of The Big Issue, the strategy was simple:

It worked, up to a point. But the business plan was flawed because it relied on advertising revenue in a recession when even well-established publications were struggling. Ironically, the fact that the magazine did better than anticipated, faster, was nearly its downfall. The magazine sold three times as many copies as forecast, which meant three times the volume of losses. They were losing 15p per copy. Three months in, they were losing £25,000 a month.

“The Body Shop effectively acted as an incubator,” says Gilligan. “When John Bird ran out of money, he had to go to Roddick and ask for more.” But funds weren’t unlimited, and in September 1992 Roddick issued an ultimatum: “There’s no more money if you don’t get it under control.”

Bird went to advertising agency after agency trying to drum up interest. “Never take yes for an answer,” he says now. “I was nearly destroyed by yeses. They would make me feel good in their offices in the West End but they didn’t actually do anything.”

The lesson: “Don’t be led astray by clever people with analysis, just do it and see what happens.” Innovation is so much more than a good idea, he stresses. It’s about persistence, resilience and singlemindedness in the face of hostility.

Working with homeless people, many of whom were addicts whose lives were chaotic and sometimes violent, brought extra challenges. Just before The Big Issue’s fortunes turned around, Lord Bird recalls asking his accountant to check on the money in the safe. As an ex-thief, he didn’t trust anybody – and in this instance his suspicions were proved correct.

When the accountant came back saying the money was in the safe but the man who had the key was on holiday in Ireland, Lord Bird gave him a rollocking. “The safe was empty, the bloke was gone. He’d taken £12,000!”

Was he tempted to give up at that point? Lord Bird shakes his head. “When I started The Big Issue, it was a chance of making a living in publishing. I liked the challenge of making something big. I wanted to give homeless people a job – it was really a crime-prevention programme. But as the year went on I saw people really turn their lives around and become fuller human beings. So I’d got the bug.”


From struggling start-up to global brand

A thousand people were reliant on The Big Issue by this point. All of them would have been back to square one if it had folded. Finally Lord Bird managed to solve the crisis. He let 10 staff go, negotiated a new contract with the printers, changing the paper type and format (from A3 to A4) and doubled the cost to the vendors, from 10p to 20p (the cover price was 50p). The vendors were incensed but Lord Bird was determined – there was no other option if he was to keep the company afloat.

Since then, The Big Issue has gone from strength to strength, becoming an international brand. It has sold 200 million copies and around 92,000 people have been or are vendors in total. Homelessness is once again on the rise in the UK and there was a 20% increase in inductions (new vendor sign-ups) in the latter half of 2016. Around 1500 people, from a range of vulnerable backgrounds, sell the magazine today (vendors now buy copies from The Big Issue at £1.25 and sell them at £2.50).

As well as the obvious positive impact on these individuals, there’s also a knock-on effect for society: Lord Bird claims the company has saved British taxpayers £520 million that would otherwise have been spent out of social care, crime and housing budgets.

A business response to a social crisis

Lord Bird was clear from the start that The Big Issue was a business, not a charity. Its motto is, “A hand up, not a hand-out”. “When I started, I said, ‘We’re a business response to a social crisis. We’re paying our way and we’re helping thousands of people.’ People in Germany, Italy, France, Russia were coming to us seeing if they could use our model. We made all the mistakes meaning they didn’t have to.” There are now 120 magazines sold globally based on the Big Issue’s business model.

This is Lord Bird’s advice for budding entrepreneurs: “You’ve got to really believe in the product or service. So you think this is going to work – what are you building in to make sure you’re not bullshitting yourself? Try and prove that it doesn’t work. Believe strongly in what you want to do but don’t be afraid to change your mind.”