How to be a futurist and safeguard your business

What if managers could predict the future and defend their organisation’s competitive advantage?

Patrick Dixon
Business education
Save to my profile

What if managers could predict the future and defend their organisation’s competitive advantage? 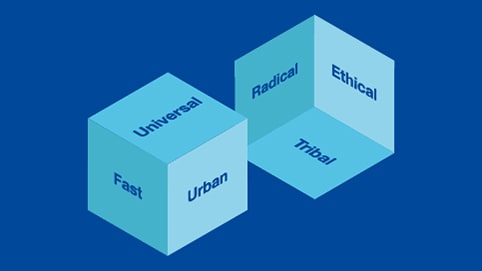 Some people tell me that it’s impossible to predict the future; that all we can do is prepare for uncertainty. But my experiences, which span three decades, disprove this thinking. Yes, it’s true that no one can predict short-term shifts in the market and the price of fuel tomorrow, but that’s not the point. It’s the long-term megatrends that will shape your future and the business you serve. Moreover, your personal future will be shaped by the futures of more than seven billion other people on earth.


Most board room debates about the future are not so much centred on what will happen, but rather, by when? Major trends affecting an industry are usually fairly obvious, but the issue is timing. For example, by when will most new vehicles in London be electric? By when will most retail payments in New York be with smartphones rather than cards? By when will some retailers start delivering by drone in Montreal? By when will more than 1% of humans living in the EU be micro-chipped – and why?


Radical changes are less common than we think, and often take a long time to impact entire nations. So when I’m asked, “What does the future look like?” I tend to say, “In some respects, remarkably similar.” Because history has taught us that progress often isn’t as fast as many tend to predict.


A lesson from history: don’t believe the hype


Take banking for example. How long have we been waiting for the death of the High Street bank? The truth is that there is more cash in circulation in the EU today than at any time in history. How much has really changed in, say, the last 15 years? What would you tell someone – let’s call them Noah – who had hidden away in an apocalypse bunker for fear of a nuclear explosion?


Updating him on major changes in our world would probably take a couple of hours. It’s unlikely to shock him when you say that the world is now hyper-connected. He knew that it would be back in the 1990s when he was using a Nokia 9800 phone, the internet was hitting retail sales, and when data was beginning to have an impact on the way businesses market their products.


Noah already knew that China would be the largest economy in the next 25 years, that life expectancy would increase, and that the world would have greater sustainability issues to contend with. He was already aware that one day every electrical device would be digital, networked together, in what we now call the Internet of Things. But daily life to him will look much the same – whether in people’s homes, how they cook food, the clothes they wear, the films they watch, the music they listen to, the cars they (still) drive or the planes they fly in.


Long-term trends have been driving predictable change in every industry for more than 30 years. They tell us for example, that the price of digital technology will continue to fall relentlessly, and that the growth of all kinds of mobile devices will continue to be rapid. Connectivity between people, companies and machines will deepen. More widely, we will see baby booms in emerging nations such as India and Nigeria, ongoing destabilisation of many nations with mineral or energy wealth, growing mistrust of politicians, more automation of routine tasks and so on.


These trends have been well known for the last 20–30 years. And any change in direction or pace of each trend is slow.


How managers can plan for the FUTURE


A key driver of the future is of course emotion. History has taught us that reactions to events are usually far more significant than events themselves. We see this every day in global markets, house prices, consumer ‘confidence’, in political debates, in social media and in the success or failure of new product launches.


I’ve created the ‘Six Faces of the Future’ forecasting tool, designed to expand our world view. Each face denotes a cluster of factors that will influence future events. They are:

Emotion is the very force that makes the cube spin.


Notice that Fast and Urban are interrelated and sit closely together, while Radical and Ethical are also adjacent to one another, on the other side. Universal is right on top, pulling in the opposite direction of Tribal. Most executives examine life from above, through a Universal lens, accentuating the Fast and Urban facets. Unfortunately, this leaves them blind to other dimensions – communities or markets dominated by Radical, Tribal and Ethical issues.


To explore the future, managers need to broaden their view of the world. When our world view remains unchallenged, the organisations we serve are at risk of a life-threatening ailment: institutional blindness. In other words, when bankers spend too much time with other bankers, the result can be a banking crisis.


When organisations lose sight of their wider context, it can lead to a form of collective madness. Their strategies point in completely the wrong direction. Leaders lose vision and fail to understand the scale and urgency of new competitors. Middle managers lack insight into how customers really feel and their thinking becomes rigid.


To focus on just one trend is dangerous; all trends connect to each other. I see so many ‘experts’ make forecasting errors because they are mainly interested in one industry, sector or region. Each trend that is likely to affect your business will only make sense in the context of other emerging trends. What if the senior leaders of a neo-bank focused only on tech trends, and shut their eyes to changes in retail spending, demographics and emerging markets? And as soon as we discuss global trade we are in a debate about future fuel costs, trade barriers and so on.


Listen to your customers – but don’t necessarily believe them


There’s a reason innovators rely on ingenuity and not on market research. Market research can’t tell you about the future. Asking people how they think they’ll behave is like asking a child what their favourite meal will be in 10 years’ time. Preferences develop. A customer’s mood can change within hours.


What market research can tell you is how your customers feel today – yes, we’re back to emotion. Markets are driven by investor mood, wars are triggered by passion – and sustained by anger – and team performance is driven by motivation. Relationships are formed by human needs, urges and desires.


By all means, use market research to sort out your customers’ problems. Just don’t rely on your customers when it comes to the future. Study them well, imagine how they’ll change, watch the pattern of their likes and dislikes and examine their social media habits. Make your own assessments based on that information.


So, how far ahead do leaders of industry need to forecast? The answer really depends on the nature of their business. Pharma clients need a 25-year vision, because it takes 15 years to bring a new drug to market. The CEO needs to have a view on what the healthcare industry will look like in 25 years. General managers might analyse the demographic of patients in 15–20 years’ time. Finance managers might consider the state of government budgets in, say, 2040. Together, their long-term views capture the megatrends likely to shape the future of their entire business.


There are significant benefits to long-termism. A handful of companies, such as Unilever, have stopped producing detailed quarterly reports in an effort to focus on making investment decisions that stretch the company’s horizons. For Unilever it means that short-term forward-planning is replaced with a robust purpose – a ‘Sustainable Living Plan’ to double the size of the business and lower its environmental impact.