From the battlefield to the boardroom

After serving their country, some ex-military leaders set out to conquer the business world. Do they have the skills to succeed?

Rob Morris
Leadership Boards
Save to my profile

After serving their country, some ex-military leaders set their sights on conquering the business world. But do they have the skills and training to succeed in a big organisation? 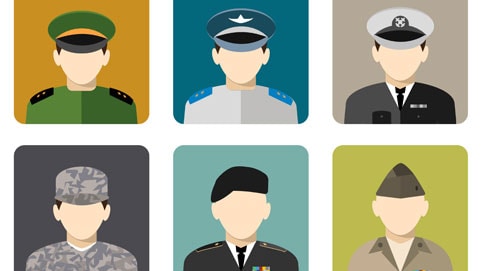 In the heat of battle, military leaders have to make quick decisions that may cost lives. They understand that one bad call can prove fatal for the soldiers under their command – a responsibility which calls for a cool, calm head.

Military leaders also need to be strategic, organised, courageous and inspiring; attributes that are as valuable on the battlefield as they are in the boardroom. Indeed, Nigel Nicholson, Professor of Organisational Behaviour at London Business School, believes people with experience of leading troops in conflicts make excellent business leaders.

“I regularly meet business people who have been in the military and they are often excellent leaders, because they know what it means to take real responsibility for others,” he says. “Training has a lot to do with it. Unlike in industry, the military never gives people command without a thorough selection process and training for dealing with others.”

In his book The “I” Of Leadership: Strategies for Seeing, Being and Doing, Professor Nicholson says there are many ways to be a great leader. His research shows that the qualities needed are always closely linked with the demands of the situation. Energy, intellect, skills and character all play an important part, but in different ways according to the challenge. The upshot is that people either have to adapt or make way for different types of leaders when the situation changes.

Life after the military

Professor Nicholson’s view that military leaders thrive in business is supported by Amit Kleinberger’s story. The CEO of Menchie’s Frozen Yogurt is a former military man who learned to lead teams and motivate the troops under his command while serving in the Israeli forces – skills that have served him well since he entered the business world.

Kleinberger was enlisted in the Israeli Defense Forces when he turned 18. He was deployed in southern Lebanon and the Gaza Strip while serving as an active duty-sergeant in a combat unit. After leaving the military, Kleinberger studied at Santa Monica College in the early 2000s and simultaneously opened a mobile phone equipment business that took off.

He spent the next few years owning and selling several businesses, before joining Menchie’s in 2008. Since then, Kleinberger has expanded the chain from an outlet in Los Angeles to nearly 500 stores around the world.

Similarly, Dan Simmons has carved out a business career after serving in the military. He served in the Special Air Service (SAS), the special forces unit of the British army, for several years, before joining the UK Ministry of Defence as a Staff Officer in 2005.

For two years, Simmons was involved in UK crisis management, advising and supporting military officers, senior civil servants and government ministers with a range of national security issues. He then worked as a Staff College Instructor from 2009–2011, providing leadership development to newly promoted army majors.

By December 2011, Simmons had left the forces to set up Metris Leadership, a consultancy specialising in the development of leaders and high performance teams. Simmons and his colleagues apply their collective experience of serving in elite military forces and use performance psychology research to develop highly effective and productive teams within businesses.

They also challenge the traditional business culture, where managers in a hierarchical structure expect their teams to follow them without question. The Metris team shows business leaders how ‘constructive dissent’ – encouraging staff to speak openly – benefits their organisation. This practice leads to effective decision-making and an environment where people feel comfortable about providing feedback to their colleagues.

Simmons says an open forum where everyone was expected to express their views served him and his men well while he was in the SAS. “I didn’t feel my role was to achieve consensus – it was to get everyone’s input, whether they agreed or not, and have a robust discussion,” he says. “My experience was that the men in the unit would buy into whatever decision was made – even if they didn’t agree with it – because they had been consulted, listened to and respected for their views and input.”

Metris recently worked with an unnamed British retailer to help foster a culture of openness and honesty where employees would feel confident about challenging their managers. Simmons’s team reviewed the company’s values and beliefs, before encouraging the management to seek out and accept constructive criticism from their staff.

“As a boss, inviting criticism can be quite humbling – especially if you don’t like what you hear,” Simmons says. “It takes a degree of intellectual self-confidence to be wrong and to willingly invite criticism in the belief that you’ll learn and the team will collectively become better. It doesn’t come easy or instinctively to individuals or organisations.”

Simmons adds: “Good decision-making requires high quality information, which is extremely hard to gather when, as a manager, you’re relying on people whose first instinct is to avoid any possible conflict. Harmony may be preserved, but inaccurate or partial feedback from people who don’t want to upset anyone means you’re using poor data, which leads to poor decisions.”

This sentiment is echoed by Professor Nicholson, who believes top military and business leaders should surround themselves with honest advisers rather than sycophants or ‘yes men’. “Leaders need truth tellers; someone who will treat you with the irreverence you deserve and not be afraid to tell you when you’re screwing up, in the nicest possible way,” he says.

“Some of the greatest leaders have had people they spark off or who provide a contrarian view. Theodore Roosevelt [a lieutenant colonel in the Spanish-American war of 1898, who later served as US president between 1901 and 1909] appointed people in his cabinet who completely disagreed with each other so he would be forced to make a decision and confront different views.”

Business leaders have it tough

In the military, soldiers earmarked for leadership roles get training before being thrust into the firing line. But organisations rarely give staff the learning and development needed to excel in a more senior role, according to Professor Nicholson.

“Businesses get talented people, promote them and give them responsibility and assume that doing that will somehow turn into coherent leadership,” he says. “Sometimes it does and sometimes it doesn’t. Organisations are waking up to the need to properly develop leaders. The military wouldn’t dream of giving someone command if they hadn’t had training in an academy, whereas in business, people are given huge responsibility with no training.”

Professor Nicholson adds that the structure within the military is more conducive to producing leaders and replacing them at a moment’s notice. “The military has a system where, to some extent, things work without leaders,” he says.” If your leader is shot down in battle, the machine does not grind to a halt.

“There is a disciplined framework in place and the military trains leaders to perform in whatever scenario they face. In contrast, business leaders get almost no training in how to manage themselves in different situations.”

Differences in training aside, military and business leaders share a common challenge: knowing when to step aside. According to Professor Nicholson, the qualities and attributes needed to lead an organisation through an economic downturn are vastly different to overseeing its international expansion, for example. The upshot is that businesses need to find the right leader for the right situation, which also applies to the military.

“There is no single, right model for leadership; it’s about being the right person at the right place and time and doing the right thing,” he says. “In a military context, you may need leaders in war and different ones for more peaceful times.

“George Patton [US army general in the Second World War] was straining at the leash in times of peace and was only really happy when in full attack mode. That led to difficulties because he wasn’t really adaptable. We sometimes need these rather extreme forms of leadership, but in other times we need more adaptable, flexible, agile leaders who are able to deal with less dramatic situations.”

For military leaders, an error in judgement can have fatal consequences. In the business world, the stakes are much lower, with a bad decision leading to a profit slump or share price drop. While the fallout for military personnel is potentially far greater, Simmons believes they and executives can be afforded the odd mistake – providing it is not too costly.

“You don’t learn anything without failing at it and if you want to be good at something, you first have to be bad at it,” he says. “It’s about developing a culture that is open-minded to trying and failing – which is not to say there shouldn’t be a careful risk management process around that – especially if your business is innovative or involved in disruptive thinking. You can’t do that without failing.

Simmons adds that allowing people to make errors is important, as long as they accept responsibility for their actions and learn from their mistakes. “There should be a measure of personal accountability when things go wrong,” he says. “But if you try to avoid failure, you’ll endlessly worry about what your competitors are up to and do nothing because you’re not prepared to take risks.”

Thanks for the nicely written article. This is a path we see more and more veterans taking quite often. All the best to them! :)