Beyond big data: getting the right mix of human and artificial intelligence

Consulting
Save to my profile

Big data is everywhere, promising better and faster decision-making. But more information doesn’t necessarily yield better solutions. Computers are good at providing answers, but they are hopeless at knowing what questions to ask.

Here, Professor Julian Birkinshaw argues that firms can reap huge benefits from increasing quantities of data - but only when managers are smarter in choosing how to use it. 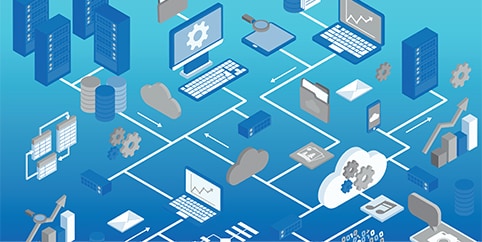 Living in a world of “accelerating change” is both scary and seductive.  Of the finalists for this year’s  Financial Times business book of the year competition, four are about the causes or consequences of technological change – The Rise of the Robots, Digital Gold (about Bitcoin), How Music Got Free, and Losing the Signal (the story of Blackberry’s decline).   Businesspeople everywhere, it seems, are anxious to make sense of the way digital technology is changing their competitive landscape.

At its heart, the accelerating change hypothesis says computer processing power continues to double every eighteen months or so, and the compounding effects of this trend will result in computer-based intelligence matching human intelligence within our lifetime – the so called “singularity”.

Ray Kurzweil, one of the gurus of this movement, has some really scary predictions:

“By the end of this decade, computers will disappear as distinct physical objects, with displays built in our eyeglasses, and electronics woven in our clothing, providing full-immersion visual virtual reality.”

“Within several decades information-based technologies will encompass all human knowledge and proficiency, ultimately including the pattern-recognition powers, problem-solving skills, and emotional and moral intelligence of the human brain itself.”

Is Kurzweil a crackpot or a genius?  It’s hard to say. I remain sceptical that artificial intelligence can ever get close to human intelligence, but rather than dabble in futurism, I want to address the implications of accelerating change to business right now.  And in particular, I want to ask, how much emphasis should we place on the solutions offered by the big data movement?
It is clear that firms can get enormous benefits from big data – companies such as IBM, Caesars Entertainment, American Express and Tesco have all succeeded in part through the use of advanced analytical techniques.  But equally, there are limits to the power of big data. Taken too far, you get stuck in analysis paralysis, you end up with a blinkered, quantitatively-driven view of issues, and your decision-making process becomes sterile.

The problem with big data, as noted by Forbes columnist Bernard Marr, can be summed up in a single number: 42.  If you remember Douglas Adam’s Hitchhikers Guide to the Galaxy, this was the answer to the great question of life, the universe and everything. Unfortunately this answer had a few weaknesses: it took seven and a half million years to compute (a severe case of analysis paralysis); it was expressed in a sterile, quantitative way with absolutely no context to help the user make sense of it; and as Douglas Adams himself pointed out, it wasn’t ever clear what question 42 was the answer to.

Here is the nub of the problem with big data and artificial intelligence: Computers are good at providing answers, but they are hopeless at asking questions.

Indeed, it is a simple law of statistics that the bigger the database, the easier it is to get support for any hypothesis you put forward.   It is sometimes said that you should let the data speak for itself, but actually that is nonsense. The truth is, the more data you have, the more vital it is to ask smart questions, otherwise you end up in the land of GIGO: garbage in, garbage out.   And this question-asking ability seems to be one of the few remaining preserves of human intelligence.
So how can you get the most value out of the big data revolution?   Essentially, you need to get a clearer understanding of the relative merits of human and artificial intelligence so that you can use them in complementary ways.

This is the value a computer system brings to bear on a business problem. Computers are the masters of raw data analysis, crunching vast bodies of data from disparate sources and summarising it in useful ways.  Increasingly, computers can identify patterns in poorly structured data (e.g. conversations) and infer meaning when the context is not entirely clear.  But as noted above, computers don’t ask smart questions, they don’t make creative leaps, and they don’t know when to stop churning away.

The value brought to a business problem by a large group of anonymous individuals, typically brought together through digital platforms such as Amazon’s Mechanical Turk, software developer Topcoder, or problem-solving site Innocentive. (this is also called crowdsourcing, and is not to be confused with crowdfunding which is about people providing money rather than labour or ideas).  Crowd intelligence is often highly efficient as a way of getting things done, and it can be highly effective as a way of opening you up to diverse points of view you might otherwise miss. But crowds are incredibly blinkered –like computers, they are good at optimising within the parameters they are given. They can be innovative within a clearly-defined space, but they are not good at truly creative tasks. They also have little sense of context, of why they are working on a particular task.

The value brought to bear by a small group of five to seven carefully-selected individuals. Teams are really good vehicles for bringing together disparate bodies of expertise.  They can be extremely good at combining insights, and coming up with novel points of view, and they are also good at challenging assumptions, or asking about the broader context of their work.  But teams are also notoriously dysfunctional, because they the individual contributors each have their own agendas, interests and styles of working.  As a result, teams are often slow-moving and end up delivering variable-quality outputs.

The value you, as an individual, bring to bear on a business problem.   Individuals are self-aware, take responsibility, and are conscious of context; they are also highly creative – all the great works of art, music or fiction are the work of individuals not teams.   But individuals can only achieve so much on their own, their expertise is limited, they are inefficient at data analysis, and they are cognitively blinkered, prone to making biased and narrow-minded decisions.

I have seen many organisations make mistakes in how they use these different forms of intelligence.  One firm used a crowd intelligence platform to come up with big innovation ideas – but all they got was iterative improvements on their existing ideas. If they wanted genuinely new ideas, they should have used human or team intelligence to take the first few steps, and then crowd intelligence to help select and sharpen up those ideas.  There was even an organisation a few years ago who had the bright idea to write a wikinovel – using crowd intelligence to do a job that is usually the preserve of a single individual. It was an outright failure – characters were introduced, only to be killed off a couple of pages later; storylines proliferated; and no-one felt any responsibility for the overall coherence of the product.

Most business challenges can be visualised in terms of divergent and convergent phases of activity. We face a problem, we think about possible solutions (divergence) then we home in on one or two solutions which we work through in depth (convergence).   To simplify things massively, the left side of the spectrum is better for divergent activities and the right side is better for convergent activities.  The best practices I have seen in this area are when companies switch back and forth between low-tech and high-tech modes of work according to where they are in this cycle.

In sum, it is easy to be seduced by technology - to invest huge sums of money in big data and analytics, or to put your faith in crowdsourcing platforms.  These are powerful forms of intelligence, to be sure, but they have their limits. They are most powerful when used in combination with much more traditional forms of human intelligence.