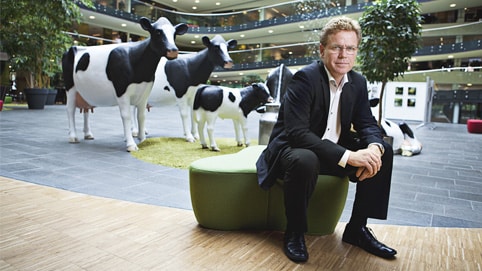 In the wake of the financial crisis and occasionally over-excitable examination of the nature of capitalism, co-operatives have been increasingly talked about. They are the alternative model, but one viewed by most as so alternative as not to be worth exploring.

For those who doubt the robustness and contemporary usefulness of co-ops in a global business world, a visit to the dairy farms of Denmark, Sweden, the UK and Germany might be fruitful. Here they would find that the co-operative cream really does rise to the top. The co-operative model is often used in the dairy industry.

In fact, 70 per cent of the major dairy companies in Europe are co-ops. More than 12,000 dairy farms in Europe are members of the Arla Foods co-operative. Arla is best known for its biggest brands — Lurpak, Arla and Castello. It is a large global business — investing in recent years in Russia, China, the Middle East and Africa — and has been run as a co-operative since its inception in Denmark in the late nineteenth century. It produced 10.4 billion kilograms of milk in 2012, has more than 18,000 employees and its 2012 turnover was some 63,114 billion Danish kroner (£7.2 billion).

The beauty of being a co-op is that Arla owns and controls the full value chain. Its farmers produce milk which it buys and then sells or turns into other dairy products which it then sells worldwide. Quality and provenance are not issues — and this is very powerful in the food industry.

Peder Tuborgh is CEO of Arla and has been since 2005. His tenure has been marked by global expansion and bold visions of the future. Arla’s Strategy 2017 maps out its objective of becoming “the leading farmer-owned dairy company”. The route to this objective is built on three strategies: developing the core business and its three global brands; creating growth outside Europe; and becoming more effective (by saving 2.5 billion Danish kroner by the end of 2015). Innovation is high on the Arla agenda. It aimed to generate 10 per cent of turnover from new product development in 2012 it achieved 14 per cent.

Tuborgh suggests that the co-op model is a perfect fit for dairy farmers. “They are used to running their farms in a certain way. They are patient and look after their animals for many years. They view things in the long-term though, of course, they do want high milk prices!” he says with a laugh. “And the model is very robust in tough times. The downturn of food and milk prices in 2009 had an impact but the market share of co-ops actually increased slightly. The farmers know there will be good times again.”

The downside of being a co-op is that Arla's ability to generate cash and equity simply doesn’t exist. It needs the farmer owners to effectively leave money in the company every year. Tuborgh emphasises that it is commercially rather than ideologically driven. “The co-op model only works as a business if you understand that what keeps people together is the business. It isn’t about love and dreams. If co-ops don’t make money, they die. Farmers want to maximise the income from their milk. The wealth and value we create is shared by many and everyone has an influence.” It is worth noting that for a co-op like Arla the farmer is the primary taxation source, the enterprise’s income can be seen as the personal income of its members.

Milk prices are a battlefield. Arla’s arrangement with its farmers is that it buys all the milk they produce. All receive the same price — no matter where they are based. This price is called the performance price as it includes what is effectively a dividend. This performance price is “Arla’s ultimate performance goal,” says the company. Every month Arla states its current highest milk price. Among other factors, this is influenced by the global market price. (Interestingly, milk prices tend to be lower earlier in the year.)

All of this makes sense though it does act as a barrier to the company exporting its model to countries where the milk price is radically different to that in Europe. “We offer our members a better place to be with their milk. We serve them and add value. It is simple. We add value by being the best in terms of innovation, branding and so on,” says Tuborgh.

To add spice to the issue of milk pricing, the EU plans to end its system of milk quotas in 2015. Tuborgh says this is something Arla is looking forward to. “There will be stress in the markets as farmers seek to take advantage. There will be a jump in the supply side but it is a short-term issue. It is something we have always been in favour of.”

Arla has operated internationally for many years. Tuborgh has worked for the company in Germany and Saudi Arabia. In 2012, however, it took a major leap into the unknown by broadening its membership to include German and British farmers thanks to mergers with Milch-union Hocheifel and British Milk Link. This broadened its membership base from 8,024 in Denmark, Sweden and Germany to 12,300 drawing in farms from Belgium, Luxembourg and the UK.

There is no doubt that running a co-op is complex — though so, too, are the governance arrangements of a PLC. Running an international co-op is ambitious. “We want to be one of the first international coops,” says Tuborgh. “Actually, we have found that farmers are more alike than you might think. They have the same dreams, worries and expectations. There are cultural differences, but they diminish when farmers are put together.”

Arla’s growth in recent years has been achieved through a combination of mergers, acquisitions and organic growth. Between 2000 and 2007 it was quiet on the M&A front. A 2004 merger went wrong and was aborted. Tuborgh arrived as CEO in 2006 and then faced troubles in the Middle East followed by the financial crisis. In 2008 Arla agreed a growth strategy which it delivered on despite the worldwide recession. Now it is in the second strategic phase of this plan with a focus on making the company truly global.

The big growth market globally is Asia. The Japanese market is now used to dairy products but there remains huge potential in China which has, traditionally, been largely dairy free. Arla entered into its first joint venture with a Chinese partner in 2005. “It requires patience. But it is exciting as you can see changing consumer patterns year on year,” says Tuborgh. There is a pattern to such development. In culinary terms chicken tends to be followed by pork and then dairy products and, eventually, beef.

In 2012 Arla developed its Chinese business with an agreement to increase exports. It has established the China- Denmark Milk technology Centre in Beijing and has invested 1.75 billion kroner in becoming co-owner of its long-term partner. Its aim is to have the capacity to export 600-800 million kilograms of milk to China annually. Arla anticipates increasing its total sales in China five-fold in 2016.

Curiously, Arla gets better prices for its milk in Asia and Russia where demand is slightly above what the market can produce. European consumers will have to get used to the fact that prices in the future will be dictated by demand in Asia. A run on milk in Shanghai may lead to a more expensive pint on the doorsteps of Swindon.

Tuborgh has effectively spent 25 years with the same company though the company he joined has no similarity with Arla's current incarnation thanks to name changes, acquisitions and so on. “As CEO I have the opportunity and the obligation to continue down the route of change,” he says.

But is the job of leading a co-op very different from running a public limited company? Tuborgh thinks not: “In the beginning I spent a lot of time with farmers but not as much as you might think — it is like a PLC CEO spending time with analysts. I spend a lot of time on how we communicate with our farmers. We have lively open communication. Transparency can be time consuming, but in the end my role is to run the business. Our farmers understand that they don’t run the company’s operations, professional managers do.

“I spend time understanding what we can learn from non co-ops — in terms of innovation, branding and so on. We have always thought like that. If co-ops are too focused on their own infrastructure and not focused downstream they degenerate.” For the outward-looking Peder Tuborgh and Arla, such a destiny appears unlikely.

London Business School and Arla are partners on The Arla Leadership Programme, a customised development programme for Arla’s top three levels of leadership, which focuses on developing a number of competencies around leadership, performance and change. Arla also regularly recruits talent from the School’s degree programmes.