Conflict is inevitable in any team, organisation or family. But what do we really know about how and why conflict works? Randall ...

Randall S Peterson
Organisational behaviour
Save to my profile

Conflict is inevitable in any team, organisation or family. But what do we really know about how and why conflict works? Randall Peterson's research reveals the reality. 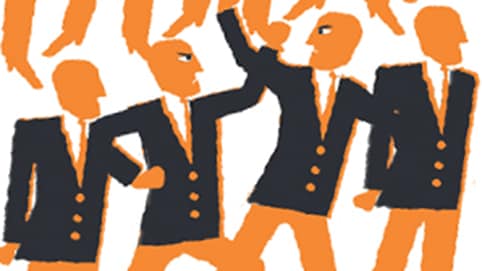 You’re a psychologist by training, what got you interested in conflict resolution?

When I was a student at the University of Minnesota, I was the student representative to the Board of Regents, the board which oversees the university. This was a who’s who of accomplished people in the state of Minnesota and, yet, it was not a terribly functional group. It amazed me how a group of accomplished people can come together and not do what you’d hoped them to do.

A lot of it had to do with their inability to manage conflict and that got me really interested in groups and in leadership in groups and managing conflict.

What has your most recent research in this area looked at?

I’ve been looking at a variety of types of groups and there are processes that consistently work and some that don’t.

Processes which work include collaborative problem solving — everybody has their point of view and they are able to discuss it. In a small group, in particular, what doesn’t work is something like majority rule. This makes for a very unhappy minority in a group. They have nothing invested in success and often have something invested in failure. Particularly for a group under the size of ten people, majority rule is a bad way of going about business. In such groups, the process I would recommend is qualified consensus where everyone has to say they can live with the outcome. It doesn’t mean they think it’s the best. It just means they can live with it. And that is enough to get people committed to the final decision because they, at least, signed on saying it wasn’t a bad idea.

Now, if you can’t reach qualified consensus and the group really is deadlocked you’re better off with the leader making the decision. What you don’t want is to turn it over to a vote and it’s five against three.

In addition to process issues, there are a host of other dynamics at work.

Yes, one of the big findings in the research literature is that within any group there are always sub-groups, with their own agenda. The mistake a lot of leaders make is they try to suppress the individual groupings or subgroupings. Instead, if you emphasise the overarching identity, people will slowly develop a dual identity and eventually that shared identity is key to engaging the whole group. If a leader tries to diminish the sub-group identities, those identities actually grow stronger and people see what divides them rather than what unites them.

The example I always use is the United Kingdom where there is so much energy — and potential conflict — around each national identity. The worst mistake a Prime Minister can make is to attack the identity of any one of the national identities — English, Scottish, Welsh or Northern Irish. What they need to do is emphasise the overall identity of being British for people to see that they all have something at stake in working together on some things.

And presumably that works in multinational corporations as well?

It works very well at any level of analysis. Look at what happens in mergers. In a corporate merger the tendency is to try to squash the old identities of the merged companies.

This is a big mistake. Studies show that if the leadership focuses on the overarching new merged identity, and doesn’t try to kill the other old identities, then there is a much better chance of a successful merger.

But, aren’t there huge cultural differences in how we treat and resolve conflict?

There are, of course, behavioural differences, but the underlying principles work remarkably well across cultures.

And can your insights apply to personal relationship conflict resolution as well as in corporations or elsewhere?

One of my big scholarly inspirations was a leading researcher into interpersonal relationships. One of the things that I learned is that every relationship has a serial argument based on personal and deep-seated values. It is a serial argument because it’s not resolvable; there are what we call backstop values. So, initial conversations over such differences tend to be painful because both parties get to a point where you are what you are and can’t explain why.

The best way, in any relationship, to deal with these unresolvable arguments in the longer term is if both parties implicitly agree never to discuss the topic. You realise that either you value the relationship enough that you’re not going to do this again or you want out.

In romantic relationships, the serial argument is oftentimes over whether or not to have children. Wanting children is typically not a straightforward nor easy to explain desire — it is a backstop or basic value. A couple may be perfectly suited to living with one another, and they may be very happy for many years not discussing children, but at some point the biological clock requires an answer. At that stage one person in the partnership needs to either change their desire for children, or get out of the relationship. There are parallels to this in a lot of work relationships. Think of entrepreneurs who have to decide how much control and equity to give to investors. Often people have very firm views about this. One partner may want to sell out, the other may not. They can run a business together, but what happens when one wants to sell-up?

Where is your research going next?

If you think about classic group development models — such as Bruce Tuckman’s model of forming, storming, norming and performing — one stage logically leads to the next. I think there is a better way of thinking about how groups develop and that is about conflict and a set of conflicts some of which are embedded in the circumstance of the group and others which emerge from the individuals within the group.

For example, I have been working with a couple of colleagues looking at cross-organisational teams. Think of when Ford wanted to build a hybrid car. It had zero battery technology so, first, it needed to find a partner. Ford found a partner in Japan. Then you have the situation where the team answers to two masters, both of whom have a stake in it. There’s always a conflict between which organisation is more powerful among the group members.

Such conflict is never fully resolvable so you have to actively manage ongoing conflict. What drives groups forward is a conflict resolution oriented strategy. Most successful groups are actually those that develop by trying to figure out their ability to manage conflict best. So group development is about conflict rather than a logical sequence. Conflict is the fundamental thing that drives change in a group.

So is conflict a kind of organisational oil?

Well, without it we’d all be standing still.

Thinking about the groups in an organisation, often the most dysfunctional group is actually the board because sometimes they don’t even see themselves as a group.

No, often they don’t. Board members see themselves as individuals. It’s a group of individuals who are thrown together who ostensibly have a shared identity or agenda, but in reality it rarely works that way. The last thing you’d want to do is somehow suppress those identities in any way. Yet on the other hand you have to bring them together. The magic lies in creating a shared identity and agenda that they all see, acknowledge, know and can actively support.

And what’s the role of academics and business schools in achieving this?