Elisabeth Kelan shows that many organizations make sweeping assumptions about working women – and men. Do you?

Elisabeth Kelan
Organisational behaviour
Save to my profile

Elisabeth Kelan shows that many organizations make sweeping assumptions about working women – and men. Do you? 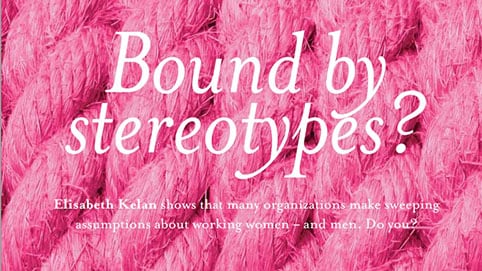 In an ideal world gender would not matter. We would be judged based on our own merit instead of on our gender. In actuality, the world is far from ideal, and conscious and unconscious assumptions about men and women influence our judgement. For example, although many women today are well-educated and earn their own income, there is still a tendency for women to marry men who are financially better off. The same is true in relation to the height of a potential partner, with women choosing men who are taller. These behaviours clearly reflect our unconscious ideals of masculinity and femininity.

One assumption about women is that they all like the colour pink. Manufacturers realized that women make 80 per cent of the buying decisions in a household and increasingly have their own disposable income but that fewer women than men buy technical gadgets. The assumed logical consequence for consumer electronic producers was to produce “pinked up” gadgets. However, research by Saatchi & Saatchi (ladygeek.org.uk) has shown that only nine per cent of women like these pink or, alternatively, crystal-encrusted mobile phones, game consoles and laptops. The research estimated that UK consumer electronic producers alone miss out on £600 million a year by not targeting women consumers appropriately.

There are many assumptions and stereotypes about women in business, too. One is that women have children and are responsible for them, which means they are less committed workers. However, research has shown that women in leadership positions often do not have children. In a recent study undertaken by the Lehman Brothers Centre for Women in Business at London Business School 52 per cent of female team leaders reported that they do not have children. This means that, for 52 per cent of women, childcare is not an issue. Of the 48 per cent who have children, this does not mean that these women are less committed to their work than men, of whom 96 per cent are fathers. The research showed, in fact, that for men, the negative spillover from home to work and vice versa is much stronger than for women. This is counterintuitive to our assumptions and contradicts the stereotypes we have about both men and women.

Earlier research on corporate best practice in relation to women in the workforce also revealed underlying assumptions. Studies found that organizations usually follow four waves of initiatives in relation to women at work: measuring and counting women, creating flexible working practices, creating networks and developing women as leaders. What was interesting is that, while organizations try to create policies, such as flexible working practices, to allow women to combine their roles as workers and mothers, they are less adept at developing women as leaders.

Unfortunately, flexible working is seen as the “mommy track”. Organizations are doing little to remove the stigma attached to flexible working and to make it a viable option for all workers, not just working mothers. That women are not developed as leaders possibly relates to unfair assumptions about the desire of women for leadership (“they would really rather stay at home”) and their dedication to the organization (“they don’t care as much about this business as male workers do”).

There are also other career-related costs to stereotypes. In my research, I have found that women tell their career biographies differently from men, even when they are factually similar. The main difference I found in the narratives is that women tend to attribute their careers to coincidence, serendipity and luck. Women construct their stories in such a way that it appears they just “ended up” in a certain position.