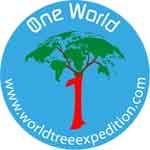 On 25 May, David Medawar, Senior Programme Manager, Dubai Centre, will begin a World Record attempt to become the fastest person to travel to all 195 countries in the world.

This global challenge will involve the delivery of a One World flag to each nation David visits in exchange for a rock from within its borders. An ambassador will accept the flag on behalf of the nation and offer the rock as a symbol of commitment to the One World Vision. Once the expedition is complete, the rocks will form part of display, upon which a One World tree will be planted.

David will commence his Expedition on 25 May by presenting Sir Andrew Likierman with the first of many One World flags.

The easiest way to support this world record attempt is by sharing your contacts from around the world through the website.

Certain countries are completely inaccessible to visitors unless there is a contact on the ground who can assist with visa formalities or potential security issues upon arrival.

In addition, David is planning to create a video documentary of people throughout the world working together not only to break a World Record, but to support the One World Vision. As David travels to each nation, he is aiming to meet the contacts he has been provided with in an effort to seek out and document the numerous connections to the School found throughout the world.

See Facebook for more information on the World Tree Expedition and how to support this World Record attempt. You can also follow the Expedition on Twitter and see videos from each nation on YouTube.