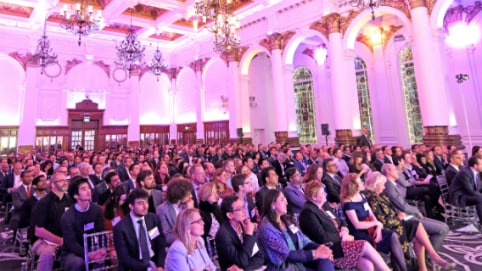 This year’s theme was innovation in a new world environment. The three speakers included Executive MBA alumna Sarah Wilkinson, CEO, NHS Digital. She said innovation is no longer just about adapting to change. “Innovation in the new world is the process of introducing new ideas, devices and methods almost continuously.”

She challenged the audience, “What does it mean to create a business environment in which we can do this? How do we integrate strategy, how do we get employees comfortable with it and how do we get our firms better connected to the outside world?”

Costas Markides, Professor of Strategy and Entrepreneurship at LBS, spoke about why it’s hard to get innovation to happen in large companies. Factors he highlighted included people’s greatly reduced attention span thanks to the internet and the fact that the average UK executive spends 40% of their week dealing with internal issues.

Feedzai’s Portuguese founder and CEO Nuno Sebastião, one of the 2017 Accomplished Entrepreneur Awards winners, talked about the grit it took to raise money for his fintech start-up. “It was hard! Portugal asked for a bailout during that period [in 2011].” During his time on the Executive MBA he learnt to push the frontiers, he said. “If you want to build something new, you have to innovate. I knew I needed to embed myself with people who think big. LBS gives you that confidence.” 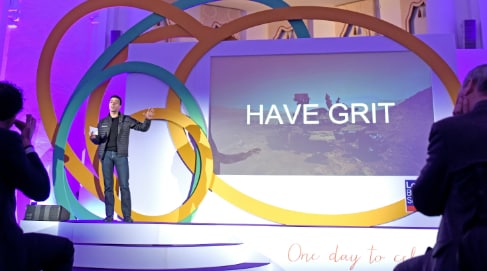 Among those listening was Portuguese alumna Sónia Vieira, who graduated from the Executive MBA in 2015. She said there was a common trait shared by everyone she had met at LBS: “People are fearless and have a can-do attitude. Nothing is impossible.”

The School’s new Dean, François Ortalo-Magné, told the assembled alumni: “I hope you appreciate how important you are to the School. You are our one non-tradable asset.” The Hon Apurv Bagri, LBS’s Governing Body Chairman and President and CEO of Metdist Group, said, “Everyone is here because they are passionate about what they gained from London Business School.”

Paul Oliver, Co-founder and CTO of JP Hamel, who graduated from LBS’s Executive MBA 15 years ago, called his fellow alumni “diverse but likeminded”. He said, “I have lifelong friends from LBS – half of them came to my wedding. Everyone is hungry for the same thing: immediate learning, a global network and a stunning brand reputation. It was hard, but it pays off for the rest of your life.”

Trevor Tay, Digital Mobilisation Senior Lead at Visa Europe, who graduated from the MBA programme in 2002, said the beauty of being an LBS alumnus was the ability to visit any major city and having a classmate there. “It’s a fantastic global institution.”

The venue was a stone’s throw from LBS’s first home, 28 Northumberland Avenue, where 36 students began studying for a business masters in September 1966. One of them, Marketing Dynamics’ Alan Melkman, was present in the WAC audience. He recalled, “We were pioneers. There were relatively few of us and only one was a woman. It’s nice to see so many women here tonight.”

The evening was one of around 85 WAC events taking place in cities and towns around the world, from Madrid to Melbourne, Johannesburg to Jakarta, Lima to Los Angeles. The Dean will travel to WAC celebrations in Dubai, New York, Hong Kong and Shanghai.