Tony Blair argues at LBS for a reformed European Union

UK/Europe Politics
Save to my profile

Former UK prime minister says he has ‘no personal ambitions’ to be EU President. 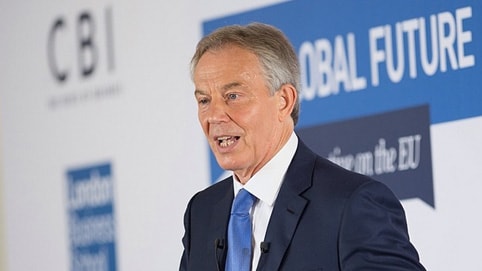 Speaking alongside Confederation of British Industry Director General John Cridland, the message was firmly pro-Europe but also took note of the resounding rejection of the EU by many voters who have propelled anti-EU parties into power across the continent.
Blair said: "The victories of UKIP in the UK and the National Front in France and the election of parties across the continent on explicitly 'anti-the-status-quo in Europe' platforms signify something. They cannot be ignored.

"The election results matter. They are a wake-up call to Europe and to Britain. Our response in Europe, as in Britain, should be to lead, not follow.

"Even among those who are in favour of Europe, there is a keen sense that the moment is right for Europe to think carefully about where it goes from here, and how it reconnects with the concerns of its citizens and how it changes in order better to realise its ideals in a changing world.

"It has to be a debate elevated to a Europe-wide level, with Britain playing a leading role, not just a negotiation of Britain's terms of membership."

The agenda for change should focus on how the EU can improve living standards through jobs and prosperity, Blair argued. It should refine its scope of responsibilities and acknowledge growing distrust of its role in matters best left to individual nations. Elected heads of government should set a ‘clear, strong platform of change’ and then ensure the unelected commission executes it.

“I mean a proper programme – almost like a manifesto for change – that is sufficiently precise that afterwards the commission knows exactly what it is supposed to do and has the full support of the council in executing it,” he explained.

"The crucial point from the perspective of Europe's future is that we ensure that the British 'issue' with Europe does not disable us from playing our part in the larger question. This will require us to be careful in framing the argument for change in Europe in a way that builds alliances for the good of Europe as a whole, including the UK, not in a way that satisfies simply a narrow-gauge dispute between the UK and the rest of Europe."

He criticised those who want to take the UK out of Europe, in particular UKIP. He said global connectivity and rise of nations with huge populations – increasingly linked to rising GDP – mean that to ‘shut down’ will lead to decline.

"The answer to the white, working class, unemployed youth in alienated communities in Britain, is not to tell them their problems would be solved if there were fewer Polish people working in the UK," he said.

"It is to provide them with the education and the skills and the connectivity that gives them the ability to face the world's challenges and overcome them."

In a question and answer session with business leaders, philanthropists and academics, he challenged the perception that Britain cannot lead in Europe. He said that in his experience, Britain more often than not ‘got what it wanted’ and successfully built alliances. Calling for ‘confidence in ourselves,’ he said that Britain was good at building alliances and added: ‘We have absolutely no problem leading in Europe. A lot of people want us to lead in Europe’

John Cridland said: “Businesses large and small are clear that membership of the EU is in the UK’s national interest. But the status quo won’t do, we cannot waste this window of opportunity with a new Parliament and Commission this year to achieve a reformed EU.”

Sir Andrew Likierman, Dean of London Business School, said: "We provide a platform for debate on central issues of concern to business and Society.  We’re delighted to host the CBI and Tony Blair in setting out the arguments for such an important debate."