The problem with strategy: it can amount to bad PR 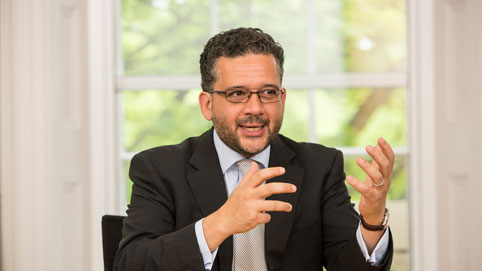 Corporate strategy goes wrong when leaders work on it in isolation, according to Michael G Jacobides Sir Donald Gordon Chair of Entrepreneurship and Innovation and Associate Professor of Strategy at London Business School (LBS).

“The problem, in many organisations, is that strategy is just bad PR.” Too many leaders can't articulate why they’re doing it and how it connects to the other choices in the organisation, he said on Radio 4’s ‘The Bottom Line’.

BBC broadcaster Evan Davis, who was an LBS research assistant in 1988, asked a panel including Jacqueline de Rojas, President of Tech UK and Ann Cairns, President of International Markets, MasterCard: “What is strategy?”

“People use the word strategy usually to excuse themselves,” said Professor Jacobides. “But it's about having a structured set of choices that is internally consistent and makes sense.”

One of the big problems with tech firms, he said, is that they have strategies to support the technology but few to support products or the ecosystem in which they compete.

Cairns asked whether strategy could be seen as a “grand plan” for the future. “I'm very concerned when I hear strategy equated with grand plans,” replied Professor Jacobides. “It’s a boardroom fallacy. People can create a nice set of PowerPoint slides that sound great but that don't end up affecting the choices of organisations.”

Strategy can be defined by the consistent commitments a firm makes, he said. “Let me give you one example. Think about what happened in one of India’s most-admired companies: Tata.”

He pointed to Tata Motors’ Nano, billed as the world’s cheapest car, priced at just $2,600 (£1,860). The tiny car generated a big buzz as it held the potential to bring millions of lower middle-class families in rural India a safer mode of transport than the motorcycles they typically relied upon.

“In the ads, people on the motorcycles looked enviously at the Tata Nano. The whole idea made sense, but Tata’s distribution was misaligned. They started selling to the cities,” he said.

Critics have said that the small car’s key disappointment lay in a misunderstanding of the Indian automotive market: cars in India are aspirational, and thus the Nano was too cheap. Professor Jacobides summed up the catalogue of errors, which included Tata’s failure to establish a strong dealership network in rural areas – the car’s target market – in one word: “Disjointed.”

“There's a fair amount of evidence that focusing on ambition without thinking about how you're going to be executing it is going to lead you astray.

“Speaking about strategy as something that happens in some giant brain, or someplace removed from the operational reality of an organisation, is dangerous.”

Cairns agreed: “I hate the idea that you would get together and have a one-day strategy meeting each year, where everyone troops in and presents to the board.”

Pressing the point that regular strategic check-ups are vital, Professor Jacobides said: “If you leave an organisation to its own devices, it will run itself for itself, not for its customers, not for its shareholders. So, to be successful, you've got to do something unnatural. And the unnatural thing is to create alignment from forces that will go in different directions if they’re not kept in check.

“That’s why the leadership part of strategy requires a lot of hard work.”

You can listen to the full podcast here.

Make your innovation strategy pay off