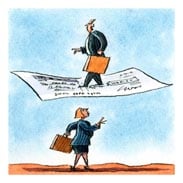 In a major article published in the American Journal of Sociology (2009), Isabel Fernandez-Mateo, Assistant Professor of Strategic and International Management at London Business School, looked at the growing world of contract employment to explore the roots of the wage gap between men and women at every stage of their careers in the corporate world. Her findings provide important insights for those who are involved in making public policy decisions about employment practices related to discrimination. They also may awaken employers to hidden processes that can be corrected through awareness, preventing future lawsuits (as well as a lack of women’s commitment to and trust in the corporations they work for) as word of such salary differentials becomes common knowledge in an era of greater openness.

The gender wage gap has been the subject of countless studies that put the major blame for the gap in the corporate world on the fact that women spend less continuous time in the workplace than men, which results in men accumulating more of the firm-specific skills that bring promotions and increased wages. Studying this issue in contract employment is informative because it eliminates this argument, since both men and women contractors are not expected to stay with the company for long periods of time. It also rules out the explanation that men are paid more to ensure they will remain with the firm over the long term, something many employers do not consider of equal importance in the case of women, who may leave not for advancement or better wages, but because of family responsibilities.

Fernandez-Mateo, who holds a Ph.D. in Management from M.I.T. and has been at London Business School since 2004, set out to test whether the increase in wage differentials over time actually could be laid at the door of the accumulation of firm-specific skills. To do so, she turned to the growing contract employment market, in which formalised work practices are non-existent — skills are not firm-specific, positions are temporary and short-term, career paths do not exist and promotions do not occur — unlike in the corporate environment.  In such a context, she reasoned, we should be hard pressed to find increases in wage differentials over time. And if such differentials did exist in contract employment, it would show that the most common reasons that have been used to explain them in the past were not necessarily the only, or even the main, reasons for their existence.

Her study analysed detailed data from a temporary staffing agency specialising in placing highly skilled “creative information technology” contractors in a variety of companies. She focused on one of the company’s US subsidiaries, examining the pay trajectories of 250 individuals from 1998 to 2002. In addition, she interviewed managers and contractors to gain a better understanding of the process used to find workers and match them to projects.

One of the discoveries she made was that, even in the contract employment world, men’s wages grow faster than women’s. One possible explanation for this is men’s greater tendency to switch clients, negotiate wages upwards and accept more variable rates of pay, taking positions at lower pay when it would allow them to increase their general skill sets. Women, on the other hand, tended to work for one client for longer periods of time, which did not allow them to reap the benefits of increasing wages by moving to a new company. Another possibility that she could not completely rule out with the available data was employer — both agency and client — bias in setting wages.

As a result of the finding that gender wage gaps developed over time in contract employment (where we would not expect it to happen), Fernandez-Mateo calls for further examination of the subject, including reasons why clients offer to rehire workers, which may affect how they are evaluated and what power it gives them in negotiating for new assignments and pay increases. She also raises questions about the role of perceptions — such as women are more risk-averse, less entrepreneurial, and prefer stability while men are more willing to take risks and accept an itinerant lifestyle — in creating the differential in wages, which opens up avenues for future research on how careers are structured and how inequality emerges in more flexible labour markets.

She notes that such studies are increasingly important because the number of contract workers — currently almost 15 per cent of the workforce — is growing. Indeed, there is evidence that many sectors of the labour market are becoming much more similar to contract markets, in which workers move in and out of positions frequently and rely more on general than firm-specific skills. With lifetime employment with a single company no longer the norm, the processes she identified as causes for wage differentials in contract employment may become increasingly widespread in the economy as a whole, which means women will remain at a disadvantage in the workplace unless some action is taken.