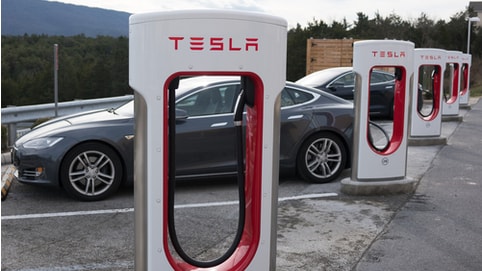 The arrival of the hotly-anticipated Tesla Model 3 marks a new era for the automotive industry.

The self-driving electric vehicle replaces oil with cutting-edge technology, making it a cleaner, more environmentally-friendly model than standard petrol or diesel cars. It also has innovative functionality, allowing drivers to open the car using their smartphones.

Prior to building this model, Tesla had a strategy, as set out by Elon Musk in ‘Master Plan, Part Deux’,  to create an expensive, low-volume car and then use that money to develop a medium-volume car for less.

“When Volvo acquired the car division of the Dutch manufacturer DAF, known for its stuffy image, it abolished the DAF brand and turned all the cars into Volvos. The cars otherwise remained identical.

“Before Volvo released other models, it first deliberately designed a new sporty 480 model, which was produced in Born, Netherlands, at the factory that built DAF cars. This turned around its stuffy image, after which Volvo successfully released a series of new, mass-market cars.”

Car manufacturers build demand by releasing tantalisingly-exclusive models such as the Tesla Model S, which costs US$205,820 (£155,866) and Volvo’s 480 model built for “dynamic people”. Then, they introduce more attainable cars.

So what opportunities exist for a mass-market self-driving car? Musk stated in his strategy that he wants to help Tesla owners make money by renting out their autonomous cars. “You will also be able to add your car to the Tesla shared fleet just by tapping a button on the Tesla phone app and have it generate income for you while you’re at work," Musk said.

In the future, cars owners could earn extra cash even when on holiday or while sleeping. This creates new opportunities for customers but also puts the brand in direct competition with innovative players such as uberPOOL, the car-sharing service which offers shared rides at a shared cost.

Another benefit is that self-driving Tesla cars and other autonomous machines free up people’s time.

Dr Vermeulen says: “According to research from the US, human beings express more satisfaction when something like work scheduling is done by a robot because it is not only less vulnerable to error, but is perceived fairer and less emotionally-driven in its approach.

“In jobs such as logistics or driving, where you make complex decisions based on algorithms, robots can often do a better job than us, but when it takes face-to-face communication and sensitivity, human beings are still way ahead.”