Wheeler Institute for Business Development
Save to my profile

Where you grow up matters, says Stanford professor Raj Chetty 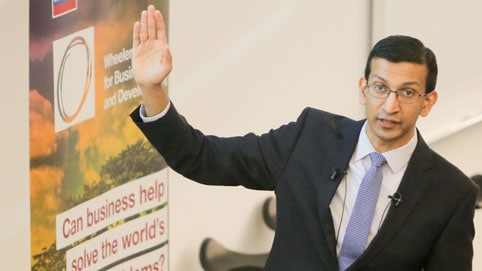 The chances of children achieving the American Dream are now almost twice as high in Canada than in the US, according to Raj Chetty, Professor of Economics, Stanford University.


Speaking at a Wheeler Institute for Business and Development event, he told London Business School (LBS) students, academics and others that he hoped business leaders and policymakers would make changes based on his Equality of Opportunity Project findings.

“How common is it that a child can make that leap?”

Differences across countries – take, for instance, the US, UK, Denmark and Canada – reveal that the odds depend on where children grow up. The chance of such a child reaching the top is 7.5%, 9%, 11.7% and 13.5% respectively.

“You might think that even in Canada your odds of success aren't all that high,” said Professor Chetty. “But remember, you can't have more than 20% of people in the top 20%. If you make the assumption that we're never going to live in a society where your odds of succeeding are negatively related to your parent’s income, then the upper bound possible statistic is 20%.”

A 7.5% or 9% shot at earning more than your parents, relative to the maximum of 20%, reveals that countries such as the US and the UK are lagging behind. “There’s a concern that these countries are no longer lands of opportunity for people growing up in low-income families,” he said.


Professor Chetty and his colleagues have studied how to increase social mobility, looking at a range of issues and categories – such as housing policy, education, race, gender and age ranges – using big data. He has compared upward mobility between countries as well as within nations.

“There are very sharp differences in kids’ chances of climbing the income ladder even within countries,” said Professor Chetty.

One area of focus involves the differences in children’s chances of climbing the income ladder across areas within the US.

By tracking seven million families who moved across areas, Professor Chetty mapped the geography of upward mobility in the US. He looked at the average household income for children with parents earning US$25,000 (in the 25th percentile).

“Second, this is about childhood environment.” Professor Chetty’s first hypothesis was whether there was a variation in the jobs available in different areas. “In fact what you see is that it's really about the differences in what's going on around you while you're growing up.”

Through further statistical analysis, he found that the earlier children moved to better neighbourhoods, the more they earned as adults. “Kids in Manhattan from birth earn about $32,000 on average when we measure their incomes at aged 30. Kids that move from Manhattan to Queens at age two earn on average $37,000.

“You see a clear declining pattern. The later you make that move from Manhattan to Queens, the less of a gain you get.”

• Where you grow up really matters. “I see this as a very encouraging result because it shows that this problem is actually changeable and malleable. You can change people’s outcomes.”
• Childhood environment counts. “The data shows that when adults make the move, it doesn’t have a big impact on them.”
• Early exposure to good environments adds up. “Every extra year of exposure to a better environment creates an incremental impact and better outcomes in the long run.”

“A cornerstone of the American Dream is the aspiration that children have a higher standard of living than their parents,” said Professor Chetty. But after estimating rates of “absolute income mobility” – the fraction of children who earn more than their parents in the US – since 1940, he found that earning potential over the years has waned. Absolute mobility fell in all 50 states.

Percent of Children Earning More than their Parents, by Year of Birth “You can see that for kids born in the 1940s, in the middle of the last century, there's a virtual guarantee that you were going to achieve the American Dream of moving up relative to your parents.

“The American Dream has faded over the past 50 years.”

The key message, said Professor Chetty, is that national trends are at local levels. “They start at our schools and in our neighbourhoods. These are things we can change in our communities that add up to a very different picture. My hope is that with the type of precise data we now have, we'll be able to tackle these problems globally.”

View the upcoming events with Wheeler Institute for Business and Development