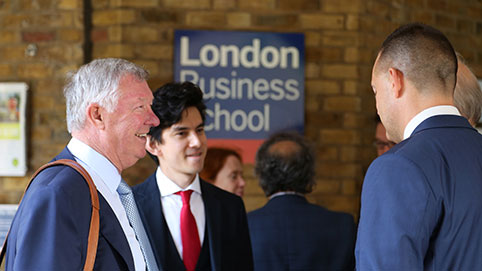 Sir Alex Ferguson, whose career saw him win 49 trophies over 39 years, talked to the students about transforming Manchester United into the world’s most valuable football club. He found success by prioritising youth-player development, rebuilding the team, being shrewd on the transfer market, emphasising attacking football, and bringing the best out of his players.

Sir Alex Ferguson says: “I was delighted to be invited by London Business School to discuss the Harvard case study along with Professor Anita Elberse. One of the elements I miss most from my time in management is engaging with young people and today gave me the opportunity to discuss leadership with some of the brightest young minds around. It’s always fascinating to hear other people’s opinions and questions on both my management philosophies and leadership in general and I appreciate the time the students took to prepare for today’s class and thoroughly enjoyed the experience."

Chris Voss, Professor of Management Science and Operations, London Business School, who teaches the MBA elective ‘Managing Sport and Entertainment’, says: "We're thrilled to welcome Sir Alex Ferguson and Professor Anita Elberse to London Business School. With an incredible track record as one of the most successful, admired and respected managers in the history of football, Sir Alex is well placed to apply his experience to the world of business."

The class will be used as part of a BBC documentary on the football mastermind’s career, which is due to air later in the year.