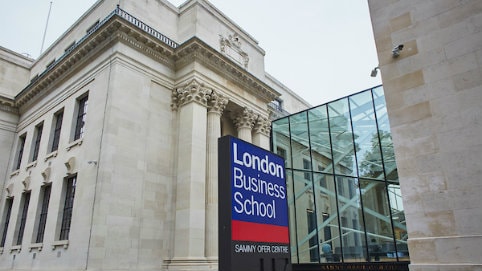 London Business School’s (LBS) Sammy Ofer Centre has been shortlisted for the prestigious AJ100  award. Presented annually by the Architects’ Journal, the award recognises the finest building completed by an AJ100-listed architectural practice in the last 12 months.

The state-of-the-art teaching centre, which increased the teaching space at LBS by 70%, is housed within the iconic, Grade II-listed Old Marylebone Town Hall – formerly two buildings, the Council House (built in 1914) and the 1930s Annexe.

The buildings were painstakingly renovated by architects Sheppard Robson, who added a glazed link by Octatube between the two buildings, creating an impressive entrance. The centre has 37 seminar rooms, six lecture theatres, a new library, breakout areas and an alumni hub. The attention to detail goes right down to the signs inside the building.

Sammy Ofer Centre opened on 26 September 2017, after a huge fundraising campaign that saw LBS alumni, students, staff and friends give to the tune of £125 million.

The largest single donation came from LBS alumnus Idan Ofer, a graduate of the School's MBA programme, who gave £25 million through the Idan and Batia Ofer Family Foundation. The building was named for his late father, Sammy Ofer KBE, a distinguished Israeli shipping magnate and philanthropist.

“My father, who left school when he was only 14, was a great believer in the value of education, and in the duty of each generation of leaders to educate the next. I am sure he would be very proud to have his name associated in this way with the future success of this great institution,” Idan Ofer said.

Gavin Robinson, Associate Partner at Sheppard Robson, said at the time: “Like most ambitious projects in Central London, the story of the redevelopment of London Business School’s campus is a combination of creativity and stamina. The deft refurbishment and uncompromising modern design speak of the ambition of the School.”

Other buildings on the shortlist of nine – six of which are in the UK – include the Bloomberg HQ  in London by architects Foster + Partners; Here East, Hawkins\Brown’s reworking of the London Olympics 2012 Media Centre into a space for UCL’s engineering sciences and built environment departments; the King Abdullah Petroleum Studies and Research Center  (KAPSARC) by Zaha Hadid Architects in Riyadh and the Queen Elisabeth Hall in Antwerp by SimpsonHaugh.

The winner will be announced at the annual AJ100 dinner on Wednesday 13 June at the Tower of London.