The suspense is over! London Business School celebrates the first ever DIIE / Management Today Real Innovation Awards. Who won – and why? 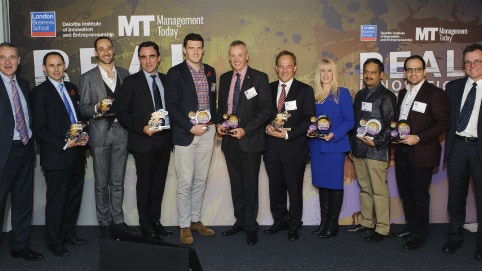 Some of today’s most creative, tenacious and pioneering businesspeople were honoured at the inaugural Deloitte Institute of Innovation and Entrepreneurship / Management Today  Real Innovation Awards 2016 at London Business School (LBS).

Deliveroo won The Best Beats First Award for its high-end fast food delivery service. Yusuf Saban, collecting the award, said, “We brought customers a market that didn’t exist before. Now we’re looking at the future and will continue to innovate.”

Steve McGuirk, who transformed Manchester Fire Service by changing its emphasis from traditional firefighting to prevention, won The Masters of Reinvention Award. “It’s courageous of LBS to give this award to a public sector organisation,” he said. McGuirk joined the fire service straight from school, aged 16, and worked his way up. “Making change that sticks has to come from within,” he added.

The Alexander Fleming Serendipity Award was given to Barrnon, whose CEO Andy Barr chanced upon the idea of using the scallop-dredging technology he had developed at huge personal expense to clean up nuclear sludge. “It was a long shot but it worked,” said Barr, going on to thank his two grandfathers for helping form his innovative mindset.

The If At First You Don’t Succeed Award went to joint winners Dubsmash and the “meals-on-wheels” service Hertfordshire Independent Living (HILS), both of which had to persist and recreate in the face of near-disaster. “I hope this award will inspire other small businesses to innovate as we have,” said HILS’ Chief Executive, Sarah Wren. “Every innovation we create makes people’s lives better.”

Embrace Innovations’ Jane Chen, who went to extreme lengths to develop her life-saving non-electric baby incubators, at one point making 100 pitches to venture capitalists in a month after key funding fell through, was awarded The George Bernard Shaw Unreasonable Person Award. Embrace’s COO Raghu Dharmaraju said, “When you’re up against the wall, you don’t have any option but to keep going.”

The event kicked off with introductions from two of the awards’ judges: Julian Birkinshaw, Professor of Strategy and Entrepreneurship at LBS and Academic Director, DIIE and Vimi Grewal-Carr, Managing Partner, Innovation and Delivery Models, Deloitte. 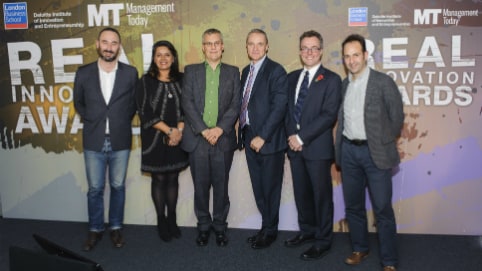 “These awards highlight what everyone here knows: the path to success is not a seamless, fluid process. Innovation is a messy business,” said Professor Birkinshaw.

Grewal-Carr stressed that having great ideas is just the start: getting them through is the hard part. Innovation is increasingly what organisations are seeking, she said, adding: “I’m delighted we’re being driven into an accelerated innovation journey by our clients.”

“What makes these awards so worthwhile is that we took a really honest, realistic look at the world of innovation,” said Matthew Gwyther, Editor of Management Today. He also commented on the diversity of the nominees. “It was heartwarming to see innovations being made by companies all over the world to benefit all of us.”

The winners were chosen from shortlists of up to five entries for each award category, from a total of more than 400 nominations. A separate public vote for the People’s Choice ran in parallel during the month of September. The six People’s Choice winners were also invited to accept their awards at the ceremony.

For news and information about next year’s Real Innovation Awards please follow #RealInnovationAwards or email innovation@london.edu