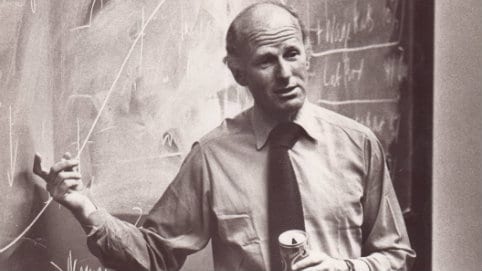 At LBS, Rose was “highly influential in setting the path for what has become one of the world’s leading business schools,” according to his colleague and friend Sir Andrew Likierman, Professor of Management Practice in Accounting.

Sir Andrew added: “There is no doubt that the foundations of LBS’s later success were sown in those first years. Harold’s wise counsel throughout his time at the School was greatly appreciated by colleagues and an important antidote to some of the wilder ideas that characterise any academic institution.

“Not that Harold was a conformist intellectually. His early advocacy of free-market thinking, long before it became mainstream in the 1980s, was characteristic of someone prepared to challenge prevailing wisdom.”

Rose was instrumental in helping raise the funds for LBS’s Institute of Finance – which opened in 1973 – and was its first director. He also recruited faculty, who made a lasting contribution to the School and to the finance subject area, and founded the Finance Group, an internationally renowned group of scholars.

“Harold’s contribution was not just as a scholar with intellectual honesty, curiosity and strong roots in practical application. From making a number of imaginative and well-judged appointments in the early days of the Finance Group to raising funds for its activities and later acting as a mentor and guide to many of the faculty, he helped give the group an influence that has lasted for decades,” Sir Andrew said.

Away from LBS, Rose was group economic adviser to Barclays Bank (1975) and held directorships at the Economist and Abbey National Building Society. He was a special adviser to the Treasury and Civil Service Committee of the House of Commons and a member of several organisations including Bank of England’s Panel of Economic Consultants, the Chancellor’s Group of Independent Economic Consultants and the Retail Prices Index Committee.