Politicians put to the test on the future of the NHS 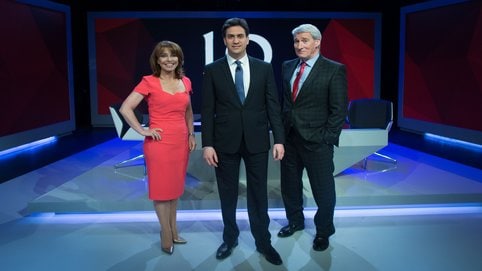 Tonight’s seven-way election debate will see party political leaders having to face up to the reality of an NHS with “alarming shortfalls”.

A recent report from the King’s Fund think tank highlighted alarming shortfalls in both funding and quality of care within the NHS.

Concluding that bed occupancy rates are at “dangerously high levels” while A&E waiting times and targets on cancer treatment are lagging behind - it claims a new government needs to inject somewhere in the region of £8bn a year until 2020 simply to meet basic patient care targets.

Its author concluded that "future debate about the NHS should focus not on how parsimonious we need to be, but on how generous we want to be”.

“The Health Service debate is being conducted in very simplistic terms of more or less money,” he says. “That isn’t surprising, because this is a General Election and parties want headline messages. But in the next Parliament more money will be needed just to stand still - the trend for people to live longer is continuing and old people cost more than the young.

“What the voters need to hear is what the parties are offering to meet these challenges. That means what the priorities are and what, if anything, is going to be done to make the money go further.”

“It’s a funded plan; we’ve set out how to pay for it,” he explained.

“Not from taxes on everyday people, not from more borrowing - but from a mansion tax on the most expensive houses over £2m, by cracking down on tax avoidance and by getting money from tobacco companies.”

But tackling the needs of the health service, of course, has to be seen against the backdrop of a continued slog towards economic recovery.

Professor Likierman says difficult choices need to be highlighted to voters, who can then make up their own minds over priorities.

“Nobody wants to talk about saving money on health, but as with any budget, it’s going to be a trade-off between different kinds of public spending,” he says.

“You want better defence? Higher quality education? To maintain social services? We all do, but as with one’s own budget, we can’t have everything. UK voters are not stupid - they know that not everything is possible when you have also got to get the deficit down.

“So it’s not a question of deciding whether health budgets are parsimonious or generous in isolation. There has to be a coherent plan about what is going to fund any increase and the sacrifices needed to make it happen.”

Tonight’s seven-way leader debate in Salford will present the party leaders with one chance to square off in a live debate before Britain goes to the polls. And concerns about a funding crisis in the NHS look set to provoke a passionate debate.

Ahead of tonight's MediaCity event, BBC’s assistant political editor Norman Smith said the stakes are highest for Cameron and Miliband. While tonight’s debate will be a "visible symbolic demonstration of the death of two-party politics," he insists the smaller parties have less to lose.

For his part, Cameron will follow up on his stance from the 26 March debate; Britain needs to save one in every 100 pounds the Government spends.

He claims voters face a choice: bear down on waste, or put up with higher taxes under Labour.

Miliband defiantly said last in last week’s televised appearance in Channel 4 and Sky News that he’s been “underestimated” at every turn but has learned to simply be himself; fight for what he believes in and put working people first.

But both will have some tough questions to answer tonight on the NHS, cuts and productivity.

George Osborne’s recent budget announcement attracted attention for the fact that he mentioned ‘Battle of Agincourt’ twice as many times as the ‘NHS’ – just two.

Voters want to know far more about the Conservative plans for propping up the health service, and how the party will stay on course with its strategy of cuts without slicing deep into the NHS.

The health service is likely to record a “substantial deficit” for the first time in 10 years, the King’s Fund reported, and it’s likely the next Government “will inherit a health service that has run out of money and is operating at the very edge of its limits.”

Cameron has claimed that Britain has been working hard to enjoy public services we can afford - a task made harder after the “appalling inheritance” his party received.

He claims £20bn has been slashed from the bill of the “broken welfare system”, with £10bn still needed.

“You don’t tax your way to growth,” he said in a comment clearly aimed at Labour. “When the next crisis comes we won’t be thrown overboard – it is manageable and doable.”

He was heavily challenged though on alleged broken promises in including no ‘top down reorganisation of hospitals”.

Austerity has pleased some business leaders, among them Philip Green CBE, who wrote in a letter to The Daily Telegraph yesterday that the Conservative-led Government has been good for business.

Two thirds of the country’s top economists though disagree.

Richard Portes, Professor of Economics, London Business School, is one of the economists surveyed by the Centre for Macroeconomics, who argues that the Government’s policies have actually damaged our economy and morale.

“Austerity is a failure,” Professor Portes says. “Just as the economy was coming out of the recession, they hit it on the head. We didn’t need a bounce downward, just when we were coming up from the crash.

“They said that otherwise our credit rating would go down and there could be a speculative attack on our government bond markets. But the credit rating went down anyway, and the markets were calm.

Zero-hour contracts too will remain a thorny issue in the run-up to 7 May.

The latest figures from the Office for National Statistics reveal almost 700,000 workers on zero hours contracts. Both parties vow to clamp down on these contracts, which look set to be a key battleground for votes.

“We have a lot of people on zero hours and part-time contracts, and productivity is performing poorly,” he said.

“Austerity put the British economy back into recession and it wasn’t necessary. Tax receipts would have gone up and the deficit would have looked better.

“The point of the austerity measures was to achieve fiscal balance by the end of the parliament and we are nowhere near that.”