Banking
Save to my profile

Professor David Miles, from the Bank of England's Monetary Policy Committee, gave a speech to London Business School and the Centre for Economic Policy Research on 23 February. 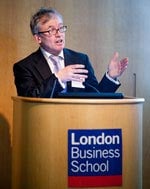 He suggested that UK growth through the its economic recovery period is expected to be only around the trend rate, rather than above it, as might have been expected had we not witnessed the extraordinary circumstances of “probably the most serious banking crisis in the UK’s history”,coupled with a sharp rise in commodity prices and a fall in world trade “at a pace that one associates with the start of a world war”.

“This is a very sobering picture; some might call it bleak” suggested Professor Miles, and “not a nice place to start from” in attempting to rebalance the economy.

The current rate of inflation in the UK is around 4%, which is twice the Bank of England’s official 2% target and, according to the Bank’s quarterly Inflation Report, inflation is also likely to rise even further in the coming months, to 4.5% or even higher.

Professor Miles stated that whilst monetary policy could be set so as to bring inflation rapidly back to the target by creating more ‘slack’ in the economy and lowering domestically generated inflationary pressures; he is sceptical about whether that is desirable, as this could add to volatility of output and undermine productivity.

He added that the MPC should avoid “showing how tough on inflation one is with tightening in policy on a scale which the assessed profile for inflation and growth do not warrant”, and that the MPC should try instead to understand why inflation was higher than expected  “and use that to make the best assessment today of where we might be going next”.

Also stressing the importance of making the financial system more robust in order to reduce the possibility of another banking crisis, Miles suggested that banks should use more equity and less debt to finance their activities, arguing that the potential economic costs of lower bank leverage are considerably smaller than the benefits.

He concluded by advising that this is now the time for long-term thinking rather than quick fixes, and that “we need to think about the overall economic costs of having a different banking structure that you get to over a prolonged transition” which, he added, is precisely the issue that the Banking Commission chaired by Sir John Vickers is currently addressing.