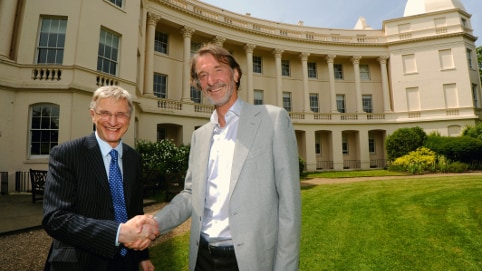 London Business School successfully redeveloped the war-damaged Sussex Place on the edge of Regent’s Park in the late 1960s, creating a balance between the splendour of the Grade I listed John Nash terrace and modern architectural styles. More than 40 years later, the School has grown from a small residential school of business education, to a global leader in management education and it is consistently ranked among the top ten business schools in the world. In recognition of his achievements and in honour of his gift, the School will name its principal Nash terraced building the Ratcliffe Building.

Jim Ratcliffe has been Chairman of INEOS since 1998 and has nearly 40 years’ experience in the chemicals industry. Jim began his career with Exxon Chemicals and completed his MBA at London Business School in 1980 before moving to Courtaulds. From Courtaulds he joined Advent International and then Inspec. Mr Ratcliffe said: “I owe a lot to London Business School and I have fond memories of studying there. It’s a magnificent building and I’m delighted to be able to help the School secure its future.”

Professor Sir Andrew Likierman, Dean, London Business School, said: “Jim has had a remarkable career, building a huge business in a field where many others have failed. His incredibly generous gift means that future generations of students, many of whom will aspire to accomplish what Jim has achieved, will have the benefit of studying in one of London’s most beautiful and historically important buildings. We are proud to call London our home and Jim’s generosity helps to ensure that we maintain our contribution to London’s world city status.”

The gift from Ratcliffe comes just six weeks before the School closes its first comprehensive fundraising campaign, which was to raise £100 million by 2018. The Campaign total has already exceeded £125 million thanks to the generosity of alumni and friends of the School. It was launched to fund capital investment, attract world class faculty, double its scholarships offering, invest in the latest technology and secure unrestricted funds in support of the School’s strategic priorities.

The Hon Apurv Bagri, London Business School’s Campaign Chairman, Chairman of the School’s Governing Body and Managing Director of Metdist Group, said: “The School’s first ever comprehensive fundraising campaign has been a huge success. This has been possible because of the support of our community, alumni and friends like Jim who believe in the vision and future of this great school. I’m confident his outstanding gift will encourage others in our community to be part of something extraordinary.”