Corporate Social Responsibility Sustainability
Save to my profile 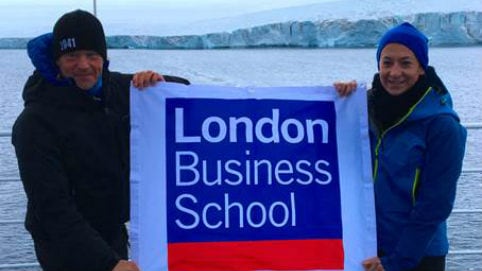 A Masters in Management alumna from London Business School has successfully completed an expedition to Antarctica alongside renowned polar explorer Robert Swan OBE, the first man in history to walk to both the North and South poles.

Sandra Marichal, who graduated from the School in 2010, spent 12 days trekking and zodiac cruising through Antarctica in harsh weather conditions as part of the International Antarctic Expedition 2016.

Marichal says: “I joined the International Antarctic Expedition 2016 with Polar Explorer Robert Swan to see climate change with my own eyes, to understand the scale of the impact our lifestyle is having on the environment. Since returning back from the expedition I have taken on a new climate ambassador role, and I am determined to help trigger a global positive change for the preservation of our planet and the human race.”

Marichal recently founded the #up2degrees initiative which raises awareness about the impact to the environment caused by air conditioning in Singapore, where she currently lives.

“Antarctica is the air conditioner of the world, as it keeps our planet cool. But Singapore's air conditioners, which contribute to increased carbon emissions, are steadily warming our planet up. If Antarctica was to melt completely, it would raise worldwide sea levels by more than 60 metres – we need to stop the melt before it is too late!”

The #up2degrees movement aims to get people to turn the temperature of their air conditioning units up by two degrees in order to reduce overall energy consumption and carbon emissions. The organisation will work directly with Singapore’s environmental authorities to regulate temperatures in public spaces and commercial buildings, and will launch its ‘Blue Bus’ education initiative aimed at school children later this year.

Marichal was one of 150 international explorers who joined Robert Swan in the expedition, organised by the 2041 Foundation. More than 6,000 hopefuls applied to join the trek, which invites participants to act as ambassadors for education, the environment and sustainability.