School community Leadership Alumni awards
Save to my profile 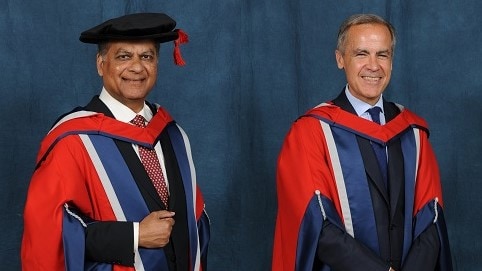 Mark Carney, Governor of the Bank of England, and SP Kothari, the Gordon Y Billard Professor of Accounting and Finance at MIT's Sloan School of Management, have received Honorary Degrees from London Business School (LBS).

Honorary Degrees are conferred on people of conspicuous merit, who are outstanding in their field or who have given exceptional service to the School. The two business leaders were awarded during the School's annual Congregation graduation celebrations held at Royal Festival Hall.

Mr Carney's Honorary Degree recognises his outstanding contribution to not only the UK, but to the wider international business community. He successfully managed the nation’s banking system at a crucial time in its history - in the shadow of the financial crisis and then in the wake of the Brexit vote.

In addition to his academic duties, Professor Kothari is chief economist and director of the Division of Economic and Risk Analysis at the US Securities and Exchange Commission. His Honorary Degree acknowledges his longstanding and rare contributions to academia, business practice and regulation.

Honorary Fellowships are awarded for exceptional service to the School and or, outstanding distinction in business. Fellowships are reserved for present or former members of School staff and alumni.