Student awards Entrepreneurship
Save to my profile 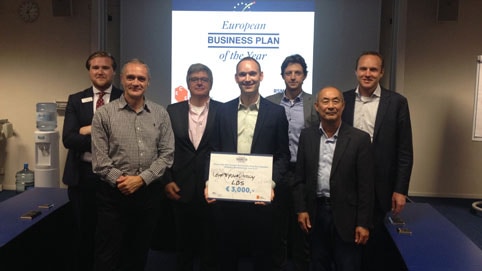 LendMeYourLiteracy, which is soon to be rebranded as ‘Pobble’, is an online teaching resource that celebrates and shares children’s writing. It aims to inspire children worldwide to write more, the end goal being to improve children’s literacy attainment.

The award resulted in a winner’s cheque of £2,132 (€3,000) to further fund the business and the ideas presented in the business plan.

Jon Smith, CEO of LendMeYourLiteracy, comments: “Winning the ‘European Business Plan of the Year’ award is a fantastic achievement for the whole [LendMeYourLiteracy] team. We’ve grown from four founders to a team of 15 in 18 months and it’s been an incredible ride for us. Achievements like this give the team validation for their hard work and show that we are on the right track.”

He continues: “I’d also like to thank London Business School for placing their faith in us by selecting us to represent them in this tough competition. It feels good to be able to pay back some of the fantastic support, mentorship and guidance that has been extended to us as we have developed.”

Lend Me Your Literacy was founded in 2013 by a team of four and includes two London Business School students – Jon Smith and Matthijs Hovelynck (MBA2015). To date, it has created 35,000 published child authors and has over 25,000 users from over 100 different countries.