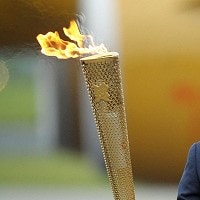 Catherine, who is head of THB Group's Compliance team, took part in the Torch relay yesterday as it passed Shepherd's Bush underground station.

She was chosen from tens of thousands of nominees for the honour of carrying the flame after being persuaded by a friend to put herself forward.

Catherine said: "Knowing my avid interest in sport an volunteer work for British Fencing, a friend for me to be nominated to fly the flag for the over 60s.

"I enjoy many sports including fencing, and ever since my daughter Chrystall began competing around the world as a leading sabreuse in Britain's fencing team I have been closely involved in promoting the value of sport generally, and fencing in particular.

Roy Martins, the head of prime services for Europe, the Middle East and Africa at Credit Suisse, carried the Olympic torch in Croydon on Monday, after being nominated by colleagues for his work with Pratham, children's charity in India.