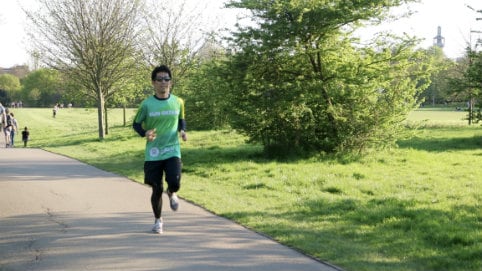 Kohei Amakusa in training for the London Marathon

A London Business School (LBS) student is running the London Marathon to raise £2,000 for Oxfam, the global end-poverty charity.

Kohei Amakusa, an MBA student from Japan, aims to complete his first ever marathon within five hours, having trained since last December for the 26.2-mile race.

“I’d done 5km and 10km when going out for runs, but wanted to test myself with a marathon,” he said.

Amakusa began training in New York during the heavy snow late last year. He then continued his regime in London, waking between 04.30 and 06.00 GMT to run in Regent’s Park for up to two hours.

“I’ve now run 21km a few times, which should be enough,” he said. “My brother, who’s done marathons, tells me that what I’m doing is ideal preparation for finishing the race.

“I’m anxious about how I’ll do, but I’m also excited. My family will cheer me on, which will be a big help.”

His biggest challenge has been finding time to train while raising his 18-month old son and studying at LBS. “It’s still difficult to find time in the day to train when I have a young one to help look after,” he said.

Pieter Henning, an MBA student from South Africa, is also running the marathon. He knows what to expect, having done up to 15 marathons in Amsterdam, Paris and Venice, among others.

“I got into running to challenge myself,” he said. “Marathons are great because you get to see some really interesting places when competing around the world.”

Henning wants to finish this latest race in under three hours, a time he has achieved in previous marathons. “I’ll try and speed things up in the last 10km if I’m feeling ok,” he said.

The sports enthusiast is looking forward to his first London Marathon. “It should be quite nice,” he said. “Most of my training this year has been for an ultramarathon, so I’m expecting to finish the race in a good time.”