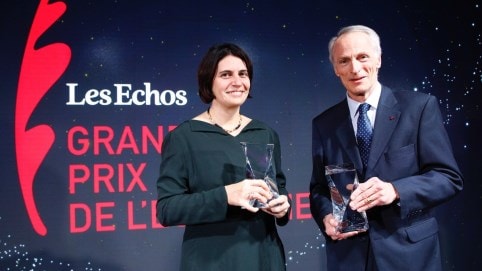 The prestigious award is given to the person who has contributed the most to the field of economics over the year.

Professor Rey was presented with the prize by former AXA CEO and Grand Prix de l’Economie 2017 Jury President Henri de Castries, and Nicolas Barré, editorial director of the French newspaper Les Echos (France), at a ceremony in Paris on December 14.

“To have won this award with someone of Mr Sénard’s standing demonstrates the important role both business and academia play in shaping the field of economics,” Professor Rey said.

“I’d like to thank the jury for their acknowledgement of my work. To receive an award of this calibre in my home country is truly a special experience.”

Professor Rey is Lord Bagri Professor of Economics at London Business School, having previously held the position of Professor Economics and International Affairs at Princeton University. She has been awarded many prizes including the Bernácer Prize, the Birgit Grodal Award, the Yrjö Jahnsson Prize, and the Prix Maurice Allais. She is the recipient of several European Research Council grants. She has received an honorary Order of the British Empire and is a Fellow of the British Academy and of the American Academy of Arts and Sciences.