Team awarded for idea to commercialise technology for electric motors 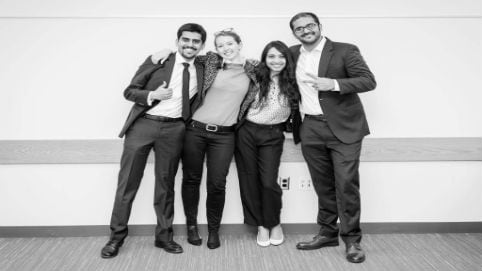 A team of current MBA students from London Business School has won a £17,435 award at the 2016 MBA Impact Investing Competition.

Team member Alexa Sharples said: “Taking part in this competition was one of the best, most tangible and most challenging things we’ve done during our time at London Business School.  Winning it is an endorsement from leaders in international impact investing. It means a huge amount not just to us, but to our company, the lead investor and those working in the wider clean technology.

The competition was held as part of the MBA Impact Investing Network and Training programme (MIINT)   an experiential impact investing programme for MBA students.  The programme culminates with a competition which sees teams from top US and European business school pitching their impact investment ideas to a team of expert judges.

This is the first year that students from London Business School have entered the competition, which is organised by Bridges Ventures. More than 100 students from the School first took part in the programme across a six-month period through the School’s Net Impact Club.  After competing internally, a final team was then selected to represent London Business School at the event in Philadelphia, where they competed against 24 other teams from international business schools.