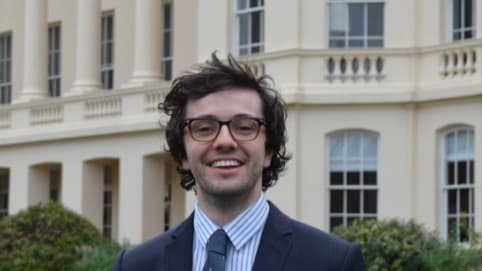 A London Business School MBA student has been recognised as an LGBT Future Leader by the Financial Times.

The list recognises aspiring leaders across the world who are a success in their own right, influential within their sector and who are role models for the lesbian, gay, bisexual or trans (LGBT) community.

Nick Deakin, who is also a SARI Foundation Scholar, said: “Diversity is part and parcel of life at London Business School, whether you look at the professional backgrounds, nationalities, genders or the sexuality of LBS students. We are united by difference and represent the truly cosmopolitan nature of London.

“The Out in Business Club has developed into one of the most active clubs on campus, driven by corporate support from the school’s biggest recruiters and buy in from the very highest levels of the School including faculty.”

The club, which takes an active role in outreach to potential applicants, has played an important part in LBS welcoming its biggest ever LGBT+ intake this year, Deakin says.

“We are tremendously grateful to LBS for providing the funding for our first ever LGBT+ scholarship candidate. Sitting between the School and the professional community, we connect our students with the most forward-thinking recruiters, current LGBT+ leaders and professional organisations who are demonstrating the return on diversity in business.”

In October 2015, Deakin ran content on being out in banking at the Reaching Out MBA (ROMBA) conference in Dallas. He sat on the committee for the ROMBA Fellowship, which awards the first LGBT+ MBA Scholarship in Europe, and took part in the OutNext Leadership Programme in 2015.

Europe’s largest LGBT+ conference EurOUT, hosted by London Business School’s Out In Business Club, will take place 18-20 November 2016 in London. This year the conference will bring together 35 companies, 40 speakers including CEOs and the Prime Minister of Luxembourg, and 250 students from 25 leading global business schools and universities.