LBS graduate and entrepreneur named 2017 one to watch 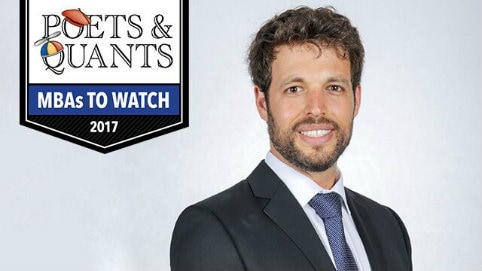 Vardi, the co-founder of Valerann, received the accolade for his dedication, commitment and collaborative approach at the School.

“There are so many amazing people at LBS,” says Vardi. “I feel privileged to be part of that community; seeing people developing themselves, their ideas and achieving incredible things. To be nominated and recognised is humbling.”

Vardi began the two-year MBA programme in 2015 to press pause on his career as a senior associate at BCG, and discover where he could make a “unique impact”. Two months into the MBA, Vardi met classmate and now co-founder Gabriel Jacobson and subsequently launched the business with two co-founders based in Israel, Shahar Bahiri and Daniel Yakovich.

“Gabrielle and I spent the first year of the MBA deciphering what we were trying to achieve and raising our seed round. In August 2016, we raised almost $1 million in funding and that's when we started hiring engineers.”

Valerann offers the world’s first end-to-end traffic management data solution – it’s set to make roads safer and smarter. Vardi says: “Roads are the largest infrastructure on earth, yet we have almost zero ability to reliably monitor and manage them. We spend a staggering 4.2 billion hours in traffic in congestion that could have been avoided had we had the right information at the right time.”

The product “packed with advanced IoT tech” will be installed in the road every 10 meters. “It shares information about traffic flow, road risks, accidents, road surface conditions, visibility, weather and location of autonomous vehicles. Everything.” That information is then shared wirelessly to control centres, visually to drivers and directly to autonomous vehicles.

Vardi hopes that the award will have a positive knock-on effect on his personal brand.

“Being an entrepreneur means establishing trust with many different stakeholders  – from investors to potential clients and employees. This award gives an indication that I’m dedicated and trustworthy.”

LBS’s Admissions Director (MBA and Masters in Finance Programmes) David Simpson, who nominated Vardi, said: “He’s a global, creative, community-minded high achiever who has contributed a lot to the community.”

Vardi is from Israel and received a scholarship established in 2010 through a generous gift from the Blavatnik Family Foundation. “It made a huge difference,” he says. “Going into entrepreneurship is scary; the scholarship tipped the balance.”