Alumni Innovation
Save to my profile 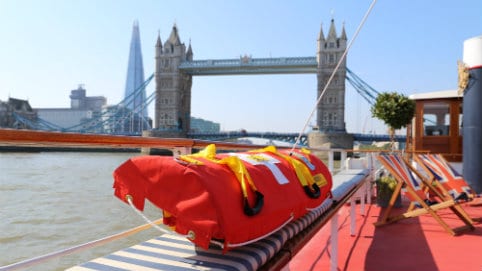 London is the latest city to have its waters kept safe by lifeguard robot EMILY.

The device is the invention of London Business School (LBS) alumnus Bob Lautrup and Tony Mulligan, Co-Founders of maritime innovation company Hydronalix. It was demonstrated today on the River Thames with Tower Bridge as the backdrop.

The River Thames is notorious for its treacherous eddies and undertows, caused by the uneven riverbed. The strong tides run at around five mph – a swimmer with average skills can swim approximately two mph. The four-feet-long remote-controlled buoy can cut through dangerous water at speeds of up to 22 mph. It weighs 25 pounds and can support five people at any one time.

Designed to ‘swim’ out to those who require immediate assistance, EMILY gives first-at-the-scene rescuers faced with several people in peril the much-needed time they need to save everyone at risk of drowning. The device has a battery-powered miniature jet ski that a lifeguard can control remotely.

Lautrup, Executive Vice President at Hydronalix, believes that showcasing EMILY in London is crucial to its global success. He said: “It’s important that people see this innovation in an iconic place that they recognise. There’s no better place than London to show that EMILY exists.” He also credits London as home to LBS, the place he gained the business knowledge to start up the venture and see it through.

The lifesaving unit, however, raised a question at the demonstration: will these robots replace human jobs, such as lifeguards and rescue service people? Hydronalix CEO Mulligan said: “EMILY is a tool to help. As well as helping to save lives, it can prevent putting lives at risk in the first place.” He explained it can guide people out of risky waters, or keep them from harm until trained personnel safely arrive on the scene.

EMILY is already aiding first response around the world. This week saw the first device bought in the UK, to service Europe’s biggest campsite, Shell Island, located on the North Cardigan Bay in the Snowdonia National Park. Last week, the Dubai Municipality announced that the innovative machine will soon be patrolling Dubai's beaches.

In February 2016, EMILY was sent to help the Hellenic Coast Guard in Greece to help safeguard refugees attempting the crossing from mainland Turkey. 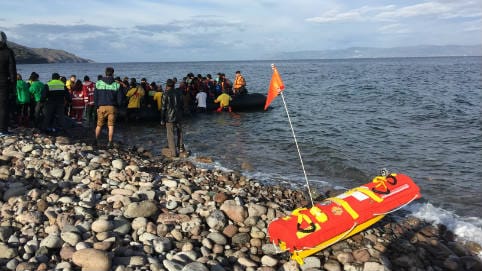