Economics Politics Government and Society
Save to my profile

Labour’s Ed Balls – the UK shadow chancellor of the exchequer – kicked off the party’s ‘Economy Week’ at London Business School, aiming to bolster the party’s image as ‘pro-business’ rather than ‘business as usual’. 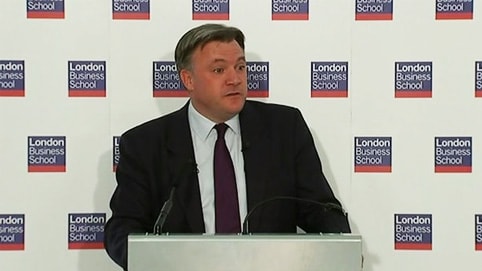 He argued that globalisation has created much greater complexity in tax systems and fuelled unimagined labour mobility. Combined with a technological revolution, middle-income as well as low-skill jobs have been wiped out.

‘The result has been, for most developed countries, rising income inequality on a scale not seen since before the First World War,’ said Balls. He added that the UK has been hit particularly hard.

Balls dismissed trade barriers, blocks on migration or exit from the European Union as a response.  He said: ‘Britain has always succeeded, and can only succeed in the future, as an open and internationalist and outward-facing trading nation, with enterprise, risk and innovation valued and rewarded. Turning our face as a nation against the rest of the world and the opportunities of globalisation is the road to national impoverishment.

With less than a year to go before the UK general election, he said Labour would keep a low rate of corporation tax and attract long-term investors to Britain. Labour would cut and then freeze business rates, he added. It would move on tax loopholes, as well as legislating to increase transparency for off-shore tax havens. It would promote international action on tax, financial regulation and pay. There would be tax incentives for long-term (equity) investment rather than debt finance.

He said Labour would promote greater focus on business and technical skills – from school-age up – and invite businesses to influence content in vocational courses.

London Business School executive fellow, finance, David Pitt-Watson, said: ‘I think the problem that the Labour Party is trying to address is the growing inequality which the economic system is producing. This is now a huge problem that we didn’t see coming. To illustrate, if we had the same income distribution that we had under Margaret Thatcher the median family today would be 50% better off. This is also a big academic debate, with economists like Piketty suggesting that if  we do not address the problem we will move back to the 18th Century, with the very rich and the very poor, and the progress of the last century will be lost.