Identifying booms and bubbles is harder in the fintech age 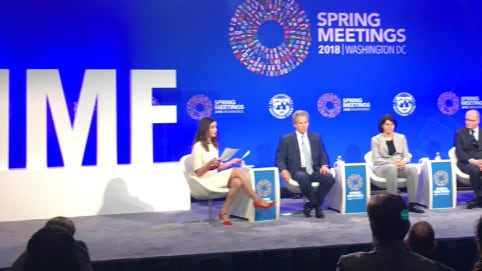 Economic models have a long way to go to catch up with the new technologies introduced in recent years, according to Hélène Rey, Lord Bagri Professor of Economics at London Business School.

“We need to acknowledge that current early-warning indicator models of crises which rely mostly on prices, valuations, yield curves on one hand, and volumes, credit growth on the other, are not extremely well behaved in terms of their stability and robustness in predicting crises,” she said.

“It’s unclear how accurate our early-warning models of crises are in identifying risks given the new structure of the international financial system,” she added.

Professor Rey was discussing the impact of trading technology in the ‘Booms and Busts: Are We Better Able to Deal with Them Today?’ session at the 2018 International Monetary Fund and World Bank Spring Meetings in Washington DC. It was suggested that fintech has created a “shadow boom” that hasn’t been captured in financial models.

Professor Rey said she believed there was a need for humility among economists. She suggested they should be prepared to use stress testing even if the underlying structure of interconnections between different financial agents is less than fully understood.

“As a first step, when we see large changes in valuation or investor base, when we see growth of certain products or segments, innovation growing fast in some parts of the financial market, we should explore what would happen if a trend reversed itself. If this valuation has gone up by 20%, say, what if it went down by 20%? Can we trace what this shock would do to the system? We could be trying to map those interconnections.”

She also emphasised the need for governments to develop preventive policies, such as using capital buffers during boom periods as an incentive against over-exuberance as well as increasing the resilience of a system to prepare for bust phases. “We need to ask ourselves, how can we go against the status quo bias that makes us do nothing in good times and only act when it is potentially too late?”

Since the 2008 global financial crisis, regulators have endeavoured to raise standards, largely by introducing more stringent rules around conduct, robustness and transparency. The result has been a significant amount of legislation, with banks focused on meeting their compliance requirements, and striving to increase stability.

The challenge for policymakers is to identify booms and bubbles and decide whether to act on them. Digitalisation has made banks’ supply chains more complex, creating a challenging environment for their controls and oversight processes.