Humans are entrepreneurs – the system is “vastly flawed”

Entrepreneurship
Save to my profile

People are brainwashed into thinking that securing a job is the only way to earn a living, says Nobel Peace Prize laureate Muhammad Yunus 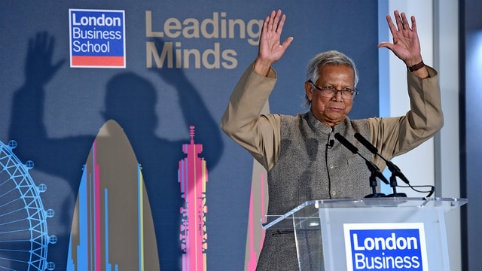 “All human beings are entrepreneurs,” economist and Nobel Peace Prize laureate Muhammad Yunus told a London Business School (LBS) audience. He blamed a “vastly flawed” system for sapping people’s entrepreneurial capacity and added that people are “brainwashed” into thinking a job is their lot.

This philosophy is at the core of Yunus’ business, Grameen Bank (GM), which has lent money to 8.8 million people in Bangladesh since he launched it 40 years ago. Yunus was introduced to the stage by Kamalini Ramdas, Professor of Management Science and Operations at LBS as the world’s “banker to the poor” because GM provides credit to the poorest of the poor (97% of them women) who have no collateral. It is a model that allows people to earn money on their own terms without facing unrealistic interest rates.

Yunus urged the audience to address the concentration of wealth. The total wealth of 99% of the global population is equal to the wealth of the top 1%, according to a 2016 Oxfam report.

He said: “The system that we developed over years pushes wealth to the top. The top is getting bigger. The rest of the economy is getting drier – all the juice is at the top. Next year it will be worse. It will be less than 1% owning more than 99% of the wealth. And worse, the 1% only live in certain countries, they’re not spread out all over the world.”

This disproportionate squeeze of wealth creates social unrest, Yunus explained: “Unevenness creates a lot of anger, unhappiness and dissatisfaction, which reflects in society.” He referenced US President-elect Trump's promise to build a wall to keep out Mexican migrants as well as the political faultlines caused by Brexit.

“Politicians make use of the unhappy people at the bottom. They blame the immigrants, military, refugees and minorities. They say, ‘If you vote for me, I’ll stop all this. I’ll build walls.’”

He appealed for transformation in the education system to produce creative entrepreneurs and said only then will wealth concentration start to even out.

“People want to do good but the system we’ve created stops them. We should tell people, ‘You’re a creative human being. Why start at the very bottom? You can do anything you want. By the time you reach the top of the ladder, your creative power will be gone.”

Yunus provoked thought when he suggested that international business schools should teach social MBAs. The next generation of leaders would then be better equipped to run social businesses and solve problems through non-conventional business means, he argued.

“As long as we are in the money-making world, our eyes are fixed on money. Once you put the social glasses on, you see the world differently.”